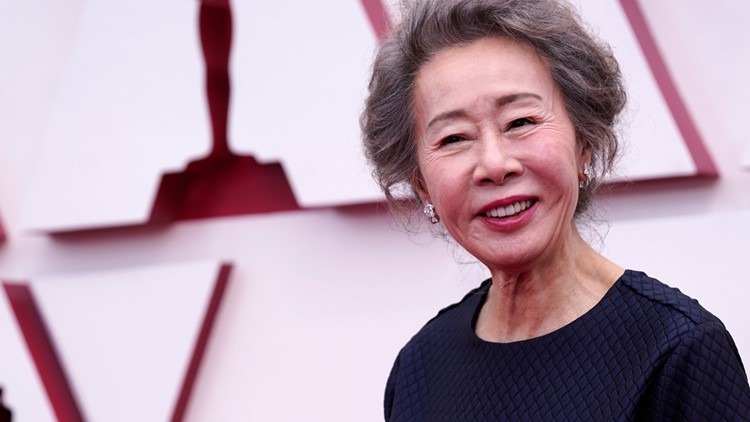 Youn, making a rare U.S. screen appearance in “Minari,” captured a string of honors for the semi-autobiographical film.

A prominent film and TV actor in her home country of South Korea, Youn won the best supporting actress award at Sunday’s Oscars. She’s the second Asian actress to win in the category, more than four decades after Japanese-born Miyoshi Umeki earned the trophy for 1957’s “Sayonara.”

In her acceptance speech, Youn was as charmingly candid as her character in “Minari.”

“You are all forgiven” for the frequent mangling of her name, she said, smiling. She then acknowledged what she called her “wonderful ‘Minari’ family,” including director Lee Isaac Chung, and her formidable peers in the category.

“I don’t believe in competition. How can I win over Glenn Close?” she said of the nominee for “Hillbilly Elegy,” who has now gone 0-for-8 at the Oscars. The other nominees were Oliva Colman for “The Father,” Maria Bakalova for “Borat Subsequent Moviefilm” and Amanda Seyfried for “Mank.”

Youn credited a “little bit of luck” for her award, “and maybe American hospitality for the Korean actor.”

She also thanked her two sons, “who make me go out and work. ….This is the result, because Mommy works so hard,” Youn said, holding her Oscar aloft.

Youn teased presenter Brad Pitt, who announced her award and whose company was involved in the production of “Minari,” for not visiting the set in Oklahoma. “Nice to meet you,” she said, later taking his arm as she walked offstage. Pitt gave her the envelope containing her name.

The first Korean woman to be nominated for an Oscar, Youn’s victory comes one year after academy voters snubbed the South Korean cast of best picture winner “Parasite.”

Youn plays Soon-ja, a card-playing grandmom with a knack for swearing, who’s moved from Korea to join her daughter and stepson in his seemingly quixotic quest to trade dispiriting work in California for farming in Arkansas. Soon-ja and her initially wary grandson form an unlikely but loving bond.

Youn, making a rare U.S. screen appearance in “Minari,” captured a string of honors for the semi-autobiographical film based on the childhood of Korean American director Lee Isaac Chung.

The Screen Actors Guild and the British film and TV academy were among those honoring her performance in “Minari,” which earned Oscar nominations including best picture, director and lead actor for Steven Yuen (“The Walking Dead”).

Backstage, Youn was asked about the bump in Asian films.

“It’s about time. It’s very nice to understand each other and we should embrace each other,” she said.

She waved off the idea of making a film with Pitt: “It would never happen with my English and age,” said the 73-year-old.

Youn became an instant film star in South Korea with her 1971 debut “Fire Woman.” At the peak of her career, she married popular singer Cho Young-nam and moved with him to the United States, where he performed at Billy Graham’s church.

Her American detour put her career on hold for nearly a decade, until she returned to South Korea, her marriage ended and she resumed acting.