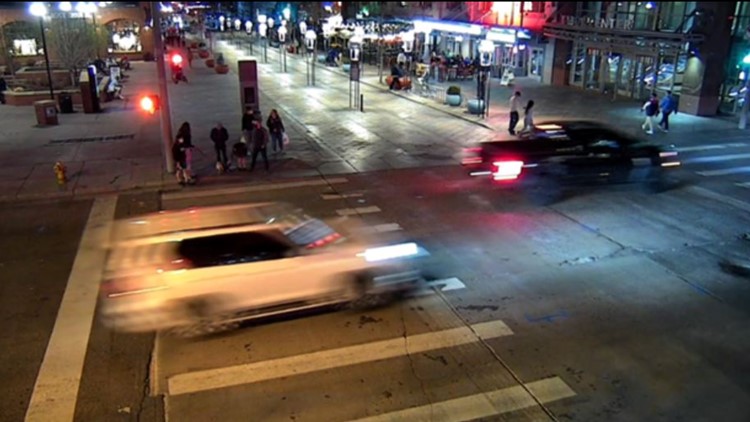 Police said Jessica Allen was killed by a street racer on April 3.

DENVER — The Denver Police Department (DPD) is warning the public of the dangers of street racing after the death of a woman that they said resulted from a drag race.

According to DPD, the drivers of a white SUV and a black pickup truck participated in a drag race in downtown Denver on Saturday, April 3.

A probable cause (PC) statement says while speeding, the driver of the SUV ran a red light and crashed into a car at 18th and Lawrence streets. The driver of that car, identified by police as Jessica Allen, was killed, according to the PC statement.

Witnesses told police the SUV driver was going between 60 and 80 miles per hour, the PC statement says.

The impact spun the car through the intersection, the PC statement says, causing it to strike a pole before finally crashing into a building. The SUV then struck several signs and rolled over, according to the document.

In addition, the PC statement says two pedestrians were seriously injured by debris from the crash.

The PC statement says the SUV driver, 40-year-old John Dahmer, was taken to the hospital and arrested there. Police said Dahmer is being held on investigation of vehicular homicide, vehicular assault and DUI.

“It beyond saddens me that because of the dangerous decision to drag race, Jessica Allen is no longer with us,” Police Chief Paul Pazen said. “The consequences of drag racing are real and I hope that the next time someone considers racing that they think of Jessica and how this careless act changed the lives of her loved ones and our community.”

Drag racing can also result in drivers losing their licenses with a 12-point traffic violation, fines up to $999 and having their vehicle impounded, according to DPD.

Denver police said it continually monitors for street racing events. It has dedicated its helicopter and other resources to disrupting the gatherings while enforcing traffic and criminal offenses for several months.

The public can report street racing or planned illegal races at ReportStreetRacing.com. Street racing can also be reported by phone at 720-913-2000 or by calling or texting 911.