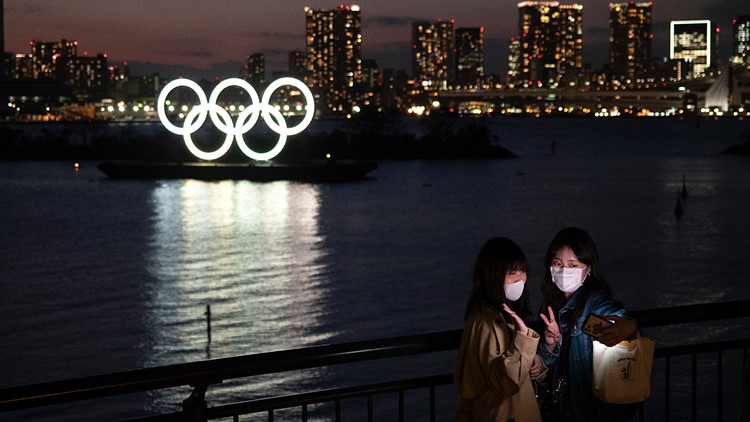 COVID-19 cases have been rising across Japan. Despite this, the International Olympic Committee and Tokyo organizers are pressing on.

TOKYO, Japan — The head of the Tokyo Olympics on Friday was again forced to assure the world that the postponed games will open in just over three months and not be canceled despite surging COVID-19 cases in Japan.

Organizing committee president Seiko Hashimoto was asked at a news conference if there were any conditions under which the Olympics would be canceled.

The question comes as the general secretary of ruling LDP political party, Toshihiro Nikai, raised the possibility the day before.

“There are a variety of concerns but as the Tokyo 2020 organizing committee we are not thinking about canceling the games,” Hashimoto said.

Nikai, the No. 2 person in the LDP party, was asked on Thursday in an interview if cancellation was still an option.

“Of course,” he replied, adding that if the Tokyo Games caused a surge in infections “there would be no meaning to having the Olympics.”

Nikai tried to backtrack later, and Japanese Prime Minister Yoshihide Suga issued a statement Thursday saying there is “no change to the government position to do everything to achieve safe and secure Olympics.”

Hashimoto acknowledged Nikai’s concern and suggested it was probably shared by the Japanese public. Polls show as many as 80% in Japan oppose holding the Olympics during the pandemic.

“The fact that he (Nikai) is concerned is a point that we need to take seriously as Tokyo 2020,” she said. “His comment has reminded us of how tedious it was for us to feel confident or be fully prepared for delivering the games.”

COVID-19 cases have been rising across Japan. Despite this, the International Olympic Committee and Tokyo organizers are pressing on. The IOC, which relies on selling broadcast rights for 73% of its income, has seen its cash flow stalled by the postponement. Japan has already invested at least $15 billion to organize the Olympics, and national audits suggest it might be twice that much. All but $6.7 billion is public money.

In an editorial this week, the British Medical Journal questioned Japan and the IOC going ahead with the Olympics. Organizers have said the Olympics will be “safe and secure,” which the editorial challenged.

“While the determination is encouraging, there has been a lack of transparency about the benefits and risk, and international mass gathering events such as Tokyo 2020 are still neither safe nor secure,” the editorial said.

On Thursday, the government minister in charge of Japan’s vaccine rollout, Taro Kono, said even if the Olympics go on, there may be no fans of any kind in the venues. He said it’s likely that the Olympics will have to be held in empty venues, particularly as cases surge across the country.

Fans from abroad have already been barred.

Hashimoto, who had said previously that a decision on venues would come in April, seemed to push back that deadline. She was not asked about Kono’s suggestion and did not raise the issue or challenge it.

“Within April I would like to set the basis direction,” she said. “The final judgement time — this as well we need to monitor the situation of the pandemic and we need to remain flexible for that.”

Organizers had hoped to generate $800 million from ticket sales. Much of that revenue will be lost and the Japanese government will have to cover the shortfall.

No fans of any kind might simplify matters. Organizers can then focus solely on 15,400 Olympic and Paralympic athletes entering Japan, and keeping in a bubble in the Athletes Villages, the training sites, and at the competition venues. Tens of thousands of judges, officials, media and broadcasters will also have to enter Japan.

The vaccine rollout in Japan has been slow with less than 1% having had the shot. The numbers will be better in three months, but will contrast sharply with non-Japanese entering the country. A large percentage of those are expected to be vaccinated, including athletes.

Hashimoto said Japanese athletes were not a “priority” for vaccination. Putting athletes at the head of the line has been largely opposed in Japan.

The IOC has said vaccination is not a requirement to participate in the Olympics. On the other hand, IOC President Thomas Bach has left no doubt he wants as many athletes vaccinated as possible.

Japanese Olympic Minister Tamayo Marukawa told reporters Friday that the government is considering conducting daily virus tests on athletes during the games as a way to guarantee safety. Previous plans had called for virus tests every four days.

Marukawa also said the government was not talking about prioritizing athletes for vaccination.

Japan has attributed 9,500 death to COVID-19, good by world standards but poor by results in Asia.

The national government on Friday was to add four more prefectures to those already under a “quasi-state of emergency.” This brings the total to 10 and now includes Tokyo neighbors Kanagawa, Chiba and Saitama.