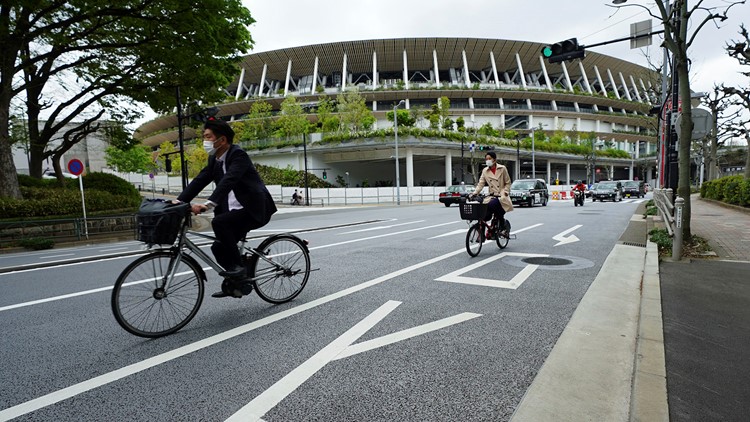 Many preparations are still up in the air as organizers try to figure out how to hold the postponed Olympics in the middle of a pandemic.

TOKYO, Japan — The Tokyo Olympics are getting closer and things are starting to stir around the venues, though not as much as you might expect. Many preparations are still up in the air as organizers try to figure out how to hold the postponed games in the middle of a pandemic.

Much of the city will be watching Wednesday as the countdown clocks around town hit the 100-days-to-go mark.

The new national stadium in the heart of Tokyo exemplifies the state of preparations. Kengo Kuma’s $1.4 billion venue is still largely sealed off to outsiders by a white wall that circles the stadium.

Over the weekend, passersby could hear rumblings from inside the venue — possible practice for the opening ceremony on July 23. The Paralympics follow on Aug. 24.

There is little movement around the Athletes’ Village, located near Tokyo Bay. The village will be tightly controlled during the Olympics, operating largely as a bubble for 11,000 Olympic athletes and 4.400 Paralympic athletes.

Athletes will be told not to socialize, to refrain for any tourism, and to come late and leave early to reduce the risks of spreading the virus.

Japanese swimmer Rikako Ikee, a 20-year-old survivor of leukemia, finished first in four races and qualified for the Olympics.

She was one of the world’s best swimmers until she was diagnosed two years ago with leukemia. She had said her plans were to aim for the 2024 Paris Olympics, but her performances have surprised almost everyone.

Ikee is sure to be a big star in Tokyo — even if she fails to win a medal. She won six gold medals in the 2018 Asian Games in Jakarta, Indonesia, and was getting very close to breaking the world record in the 100-meter butterfly — her best event.