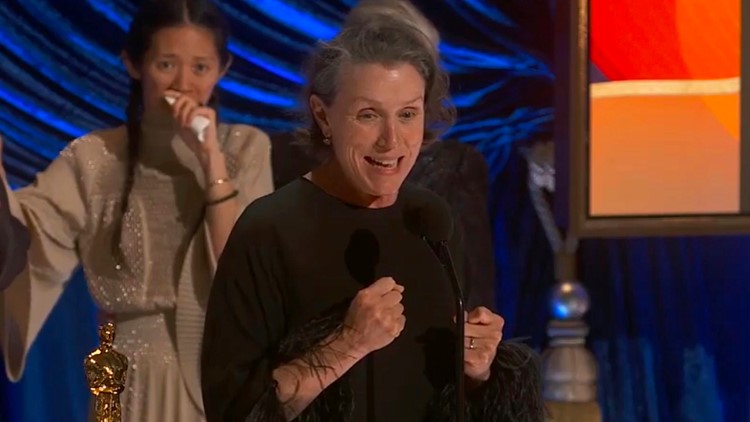 It’s the third best actress Oscar for McDormand, who also won in 2018 for “Three Billboards Outside Ebbing, Missouri” and in 1996 for “Fargo.”

LOS ANGELES — Frances McDormand has two more Oscars. She may hang on to them a little more tightly.

She won best actress Sunday night for her performance in “Nomadland,” which also nabbed best picture. As a producer on the movie, she collected a trophy as well.

McDormand kissed her director-husband, Joel Coen, and rose from their table inside Union Station in downtown Los Angeles to make her way to the stage for one of the shortest speeches of the night.

“I have no words,” she said. “My voice is in my sword. We know the sword is our work and I like work. Thank you for knowing that and thanks for this.”

In “Nomadland,” McDormand plays Fern, who hits the road after the death of her husband and loss of her job at a plant that is shut down. She buys a van and seeks seasonal work, meeting fellow nomads and learning survival skills along the way.

RELATED: The Oscars bring back red carpet glam in whites and gold

The 63-year-old actor now has three best-actress Oscars. She won in 2018 for “Three Billboards Outside Ebbing, Missouri” and had her trophy briefly stolen during the post-show Governors Ball. It was quickly recovered. Her first Oscar came in 1996 for “Fargo.”

McDormand won over front-runner Carey Mulligan of “Promising Young Woman” and Viola Davis of “Ma Rainey’s Black Bottom.” Andra Day of “The United States vs. Billie Holiday” and Vanessa Kirby of “Pieces of a Woman” were first-time nominees.