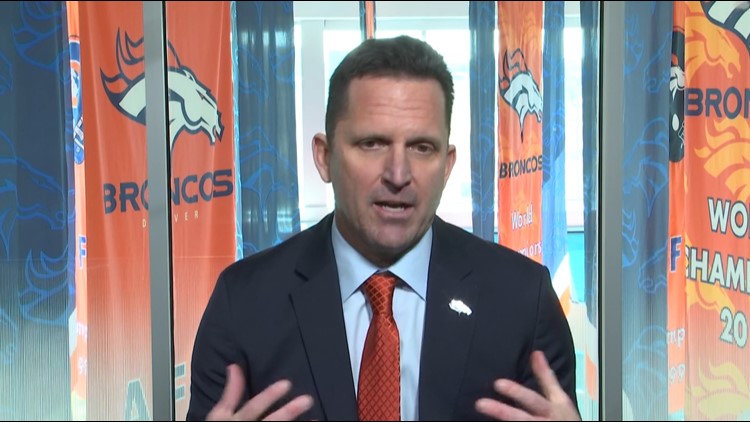 Ever since the team was in on Stafford trade talks nearly three months ago, anticipation for a new quarterback has grown.

DENVER — Bronco fans and the media who cover the team continue to wait on George.

Team followers are getting anxious. The question has gone from who will be the Broncos’ new quarterback that promising first-year general manager George Paton brings in to upgrade the position, to what’s taking him so long?

It began Jan. 23, when the Detroit Lions and Matthew Stafford announced an amicable divorce. When the Broncos attempted to swing a deal for the 12-year-starter and former No. 1 overall draft pick who still has a gifted, powerful arm, the secret was out.

Paton and the Broncos’ coaching staff were seeking better quarterback play than what they got from Drew Lock last year.

The Broncos’ trade proposal for Stafford was substantial but also cautious and reflective of a quarterback who, despite his wondrous arm talent, was about to turn 33 years old and had just one Pro Bowl berth with zero playoff wins on his resume.

The Lions instead traded Stafford to the Rams in exchange for their own expensive quarterback Jared Goff, a third-round draft pick and two future first-round picks.

> Video above: After getting an extra 9th regular-season home game, Broncos adjust with ticket price increase

Paton did well to not go that far with his proposed compensation package. The Rams are Super Bowl contenders. The Broncos, who are coming off a 5-11 season and four consecutive losing marks, are not.

Still, the message has been hanging out there like a billboard for northbound Interstate 25 drivers approaching Empower Field at Mile High: The Broncos are not fully committed to Drew Lock, despite his gifts and swagger.

It’s an understandable position. Lock ranked 32nd among quarterbacks who qualified for the league’s passing title last season. The league has become so reliant on the passing game, the belief is that Super Bowls cannot be won with subpar quarterback play.

Not since the Broncos with Peyton Manning in 2015 has there been an exception. Manning has been retired long enough to have been elected into the Pro Football Hall of Fame. Current Broncos’ left guard Dalton Risner said during a podcast with Matt Lombardo of Fansided.com that Manning has been visiting with Lock this offseason on the mental aspects of QB play, including film watching.

This is not surprising. Manning stated his affinity for Lock and his regular communication with the Broncos’ third-year quarterback during an exclusive interview with 9News in February.

“I’m a Bronco fan, I’m a Drew Lock fan,’’ Manning said. “I’ve known him since he came to work our football camp, and I’ve kept up with him and stayed in touch with him, so I’m pulling for him. Look, last year for anybody who had a new offensive coordinator and a younger quarterback, it was going to be challenging. The teams that really got into the hunt this year had veteran quarterbacks, veteran coordinators, had some chemistry together. (Tom) Brady was kind of the exception. I think Tampa figured out they were better off running a lot of his plays. Took them a while to figure that out, but with the pandemic offseason, not having much time, it’s just not easy.

“I’m pulling for Drew. I’m excited for their prospects with a full year and an offseason getting on the same page in this system with some of those new players, and I’m excited for him to have a good year this year.’’

RELATED: Peyton Manning on retirement: ‘Still on too many commercials; probably on TV way too much’

Manning’s opinion on Lock no doubt carries some influence, but it has not stopped the Broncos from trying to do better. Five days after Stafford and the Lions announced their mutual parting of ways, a younger and more physically talented quarterback, Deshaun Watson, demanded a trade from Houston. 9News was the first to report Watson had interest in playing for the Broncos, and at the appropriate time, the interest would likely be mutual. Broncos’ safety Kareem Jackson later confirmed his former teammate’s interest in Denver and openly lobbied for Watson.

The Texans were steadfast in stating they were not trading their star quarterback, a stance they might now regret following numerous “deeply disturbing” (the league’s words in a statement) allegations of sexual assault against Watson.

While the Broncos monitored but never engaged in trade talks for Watson, Paton and Carolina’s Scott Fitterer, another first-time GM, did discuss a swap involving Panthers’ quarterback Teddy Bridgewater. The talks never became a transaction. Bridgewater has since been placed more prominently on the trading block following Carolina’s acquisition of young starter Sam Darnold from the Jets.

A Lock-Bridgewater training camp competition come late July at UCHealth Training Center might still be an option, although Nick Foles, Gardner Minshew, Alex Smith, Nick Mullens and a first-round draft pick are also expected to be on Paton’s page of possibilities.

Come to think of it, what has Paton passed on besides an uninspired group of free-agent quarterbacks (Andy Dalton? Ryan Fitzpatrick?) and the team’s future in exchange for the aging Stafford?

And yet much of Broncos Country has grown impatient. To help calm worry, a reminder the NFL Draft doesn’t commence until April 29. It’s still 17 days away. Paton has traveled by private plane to attend the Pro Day passing workouts of Trey Lance, Zach Wilson and Justin Fields – three of the top five quarterback available in this draft. He did not personally attend the two Pro Day workouts of Mac Jones, even though the Broncos do like the Alabama quarterback.

RELATED: A closer look at the Big 5 quarterbacks in 2021 draft

The other Top 5 quarterback, Trevor Lawrence, is the Top 1 quarterback. Lawrence is going to Jacksonville with the No. 1 pick. Paton’s pick at No. 9 was too far away to have bothered to attend Lawrence’s Pro Day workout. The Jets with the No. 2 overall pick were too far away. They are expected to take Wilson instead.

There has been chatter from various media outlets that suggest Paton should move up from No. 9 to Atlanta’s No. 4 pick to get his QB. Maybe he will. But shouldn’t he wait to see which QB the 49ers take at No. 3 before he decides whether he likes the fourth remaining QB enough to trade away so many draft picks to move up there? Contingency first-round draft trades are arranged every year.

Still, it must be difficult to stay patient for months in a social environment that incites critical judgment by the second. Paton’s patience with the quarterback market should not be fully subjected to review until the evening of May 1, when the three-day draft, and much of the trade market, concludes.

So long as Paton understands that until then, the anxiety from Broncos followers will mount.

RELATED: Before and After: Former Bronco offensive lineman Orlando Franklin is a new man

RELATED: Broncos trivia: Test how well you know your team in good times and bad