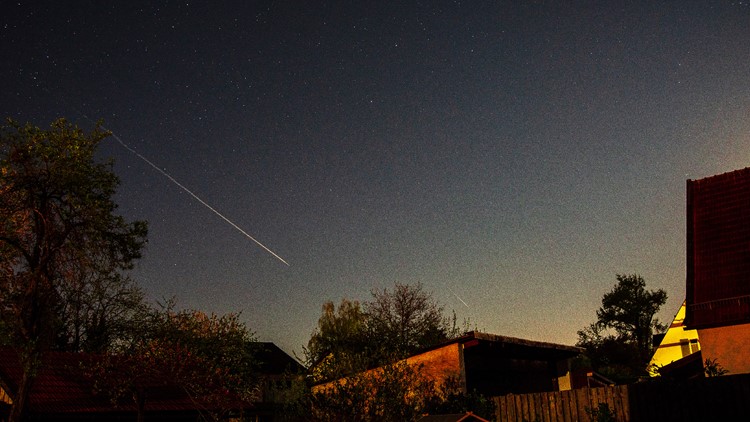 This year, there will only be a short window of time to catch the peak of the Lyrid meteor shower.

WASHINGTON — There will be multiple meteor showers expected to peak in the days and weeks ahead, according to NASA, with the annual Lyrid meteor shower coming up in the early morning hours on Thursday.

Visibility though, may be a challenge this year for those trying to catch the celestial show from the U.S.

Your best chance at catching a glimpse of the Lyrid meteor shower may require waking up before sunrise on Thursday, April 22.

The waxing gibbous Moon may mess with visibility, according to experts, but if conditions turn out to be ideal, you could expect to see around 18 visible meteors each hour.

During the Lyrids peak, 10-20 meteors can be seen per hour, according to NASA, though some years it has surprised watchers with as many as 100 meteors per hour.

What is a waxing gibbous Moon?

Since the Moon does not emit its own light, it’s the light reflecting off of it from the sun which creates its illumination.

Unfortunately, the waxing, or growing, gibbous Moon could be illuminated enough early Thursday to diminish the darkness in the night sky that one would need to best see the Lyrids. The waxing gibbous Moon will light up early evening and appear to have more than half of its disk lit up. But, it will be less than a full Moon.

The Moon is expected to set later in the second half of the night, possibly between 3:30 a.m. or 4 a.m. local time, AccuWeather says, so you should have a window of possible higher darkness depending on where you live.

How do I view the Lyrid meteor shower?

According to NASA, this year there will only be a short window of time without light interference to try and catch the peak of the annual Lyrid meteor shower. The space agency explained that the Moon will set about 30 minutes before any sign of dawn begins to show in the east at 4:07 a.m. and 4:44 a.m. EDT, respectively.

It’s also recommended that you give yourself at least 30 minutes under the dark sky, so that your eyes have time to adapt to the low light. Space Center Houston recommends that you bring a sleeping bag or a blanket or a lawn chair and lie flat on your back with your feet facing east.

The show is expected to last until dawn, so while you’ll have plenty of time to view the meteor shower, certain uncontrollable events from above such as cloud cover, possible storms in your area and even lighting conditions, can all hamper your view.

Promising news though, according to AccuWeather, much of the U.S. should experience clear weather conditions that could give celestial watchers a good vantage point overall to see the Lyrid meteor shower.

How long will I be able to view the Lyrid meteor shower?

While the short window in the early morning hours of Thursday, April 22 is considered the peak, it’s possible to still view the meteor shower in the nights that follow, and precede April 22. But, depending on cloud cover in the sky, storms or light interference from the Moon or where you live, that has the ability to hamper viewing badly.

The next night, Friday, April 23, will bring what NASA describes as the less predictable Pi-Puppid meteor shower. It’s peak is expected to occur that morning.

According to NASA, people have been viewing Lyrid meteor showers for over 2,700 years. It is one of the oldest known meteor shows, with the first recorded sighting of the Lyrids happening in 687 B.C. in China.

What looks like glowing pieces of celestial objects falling like rain are actually pieces of debris from the Comet C/1861 G1 Thatcher, NASA scientists say. Each year in the middle of April, Earth runs into this flow of space debris and particles that burn in our atmosphere cause a meteor shower. The particles start out as tiny specks of dust hitting our atmosphere at 109,600 miles per hour.

Show proof of your vaccine and get a free Budweiser beer