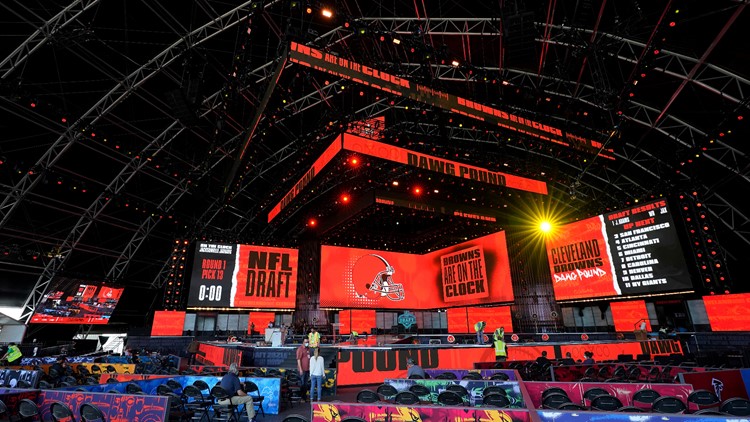 Even during a pandemic, tens of thousands of visitors are expected for what is sure to be one heck of a party!

CLEVELAND — The moment has finally arrived.

The 2021 NFL Draft has made its way to Cleveland, with tens of thousands of fans pouring into the lakefront to see who their teams will select this year. Even during a pandemic, hotels and businesses are bustling for what is sure to be one heck of a party.

This marks the first time in two years spectators will be allowed to attend the draft, after COVID-19 forced last year’s event to go all-remote. The league is allowing fully vaccinated people directly into the area with the main draft stage, while others can still take part in spectacles such as the NFL Draft Experience festival as well as other attractions throughout downtown Cleveland. Some health restrictions are also being relaxed as more people get vaccinated, per CDC recommendations.


As for the draft itself, there isn’t a lot of drama surrounding the first overall pick, with the Jacksonville Jaguars expected to take decorated Clemson quarterback Trevor Lawrence. After that, though, things could get interesting, especially when it comes to the remaining QBs on the board.

LOCKED ON MOCK DRAFT: Who will your team pick?

We’ll have live, up-to-the-minute coverage for you throughout the weekend, with updates on both football as well as the atmosphere. Scroll below to see what’s happening now!

1:52 p.m. – After a couple days of warm weather, temperatures have dropped a bit in Cleveland, and rain has also been falling on and off. Forecasters hope things will clear up by draft time.

Once our main line of downpours and gusty winds moves out, we’re left with just on and off light showers through 5pm until another round in Indiana works in. Temps will continue to slide across all of northern Ohio. #3weather #wx @wkyc #NFLDraft #cleveland pic.twitter.com/chbi1PhhpM

Andrew and Brittan Berry’s 1st round pick of the 2021 draft came a little early.

Prosecco Rosé: The Bottles Actually Worth Buying This Summer

Prosecco Rosé: The Bottles Actually Worth Buying This Summer

More than half of all appointments at mass vax sites unfilled

Superfans’ Message to Taylor Swift, BTS and Other Music Superstars: Enough With the Deluxe Albums and Pricey Merch