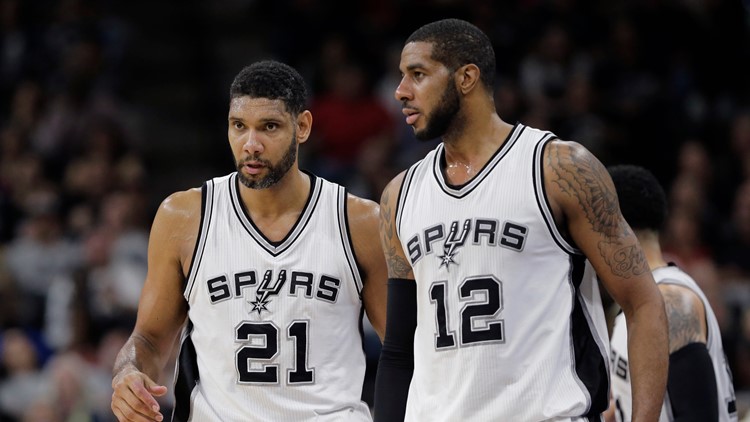 BROOKLYN, N.Y. — Former San Antonio Spur LaMarcus Aldridge announced his retirement Thursday morning following an issue with an irregular heartbeat which he described as “one of the scariest things I’ve experienced.”

“I write this letter with a heavy heart,” Aldridge’s message, which was posted to social media Thursday morning, starts. The seven-time All-Star details how during his last game with the Brooklyn Nets, he began experiencing an irregular heartbeat. Aldridge said the rhythm worsened through the night, “which worried me even more.”

Aldridge alerted the Nets and went to the hospital to evaluate the issue. Aldridge said he came to the decision to retire in order to “put my health and family first.”

Along with the Portland Trailblazers, where Aldridge started his career, and his current team, Aldridge thanked the Spurs for “letting me into the family and giving me 5 fun years.”

Read the full letter below.

Aldridge has had heart issues in the past and was diagnosed with Wolff-Parkinson-White syndrome – an abnormality that can cause a rapid heartbeat – as a rookie in 2007.

Aldridge missed the final seven games of his rookie season after doctors used an ablation – a procedure designed to treat tissue in the heart to make the heartbeat regular again – to treat him and get him back on the court. He also needed an ablation during training camp in 2011 but was able to return to the court in time to play in the preseason and made the All-Star team for Portland that season.

He missed time during the 2016-2017 season with the Spurs as he dealt with heart arrhythmia.

LA was an immensely productive player for a very long time at the highest level, hats off to him. https://t.co/PLAA5PQ3MS

Last month, Aldridge and the Spurs agreed to a buyout, paving the way for the big man to sign a 1-year contract with the Nets. The Spurs organization had announced earlier in March the 35-year-old would not return to the team – a mutual agreement, according to Coach Gregg Popovich – and that the front office was working to trade him.

He’s one of just six players in Spurs history to tally more than 7,000 points and 3,000 rebounds, having arrived in the Alamo City in July of 2015.

RELATED: The LaMarcus Aldridge Legacy: The One Who Chose Us

Why Puerto Rico Is a Tempting Covid Getaway