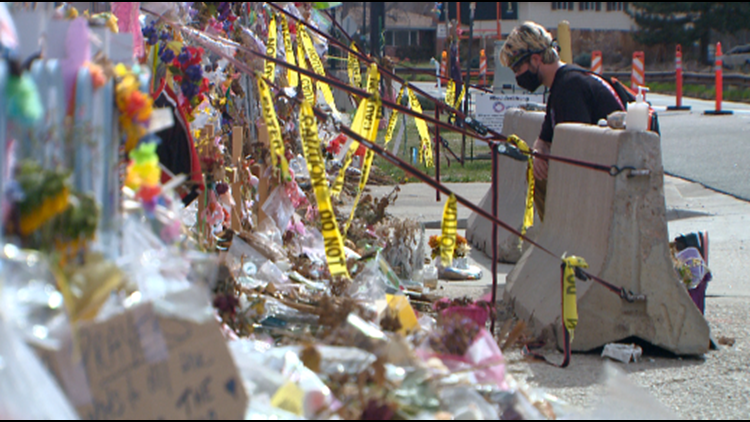 BOULDER, Colo. — More than a month has passed since the mass shooting at the King Soopers on Table Mesa in Boulder. For the first time, employees who were at the store that day when 10 people died share what they saw to 9NEWS.

Several of the victims were employees themselves.

“It definitely doesn’t feel like over a month,” said Logan Smith, a barista at the Starbucks inside the Boulder King Soopers. “Every single day has felt like just one day.”

Smith was working at the Starbucks when he heard the gunfire. He visits the store several times a week to pay his respects at the memorial. On the day of the shooting he was not sure he was going to walk out of the King Soopers alive.

“Perched up against the wall, I day dreamed three different realities of how I was going to get killed,” he said.

He said he watched the shooter kill his friend and co-worker Rikki Olds as he called 911 for help. He said her laugh lit up any room.

“There are times at night I have survivor’s guilt and I am like, why couldn’t it have been me who was one of the 10,” he said.

Emily Giffen was a manager at King Soopers. She now lives in Pennsylvania with her family. Giffen said she had put in her two weeks notice so she could move back home to take care of her mom.

“Five days before my last day is when this happened,” she said.

She was taking a smoke break outside when the gunman arrived. Giffen believes that saved her life.

“Hearing the stories of my coworkers hiding in the chip aisle and hiding in cupboards and cabinets, it breaks my heart,” she said.


Over her heart, Giffen now has a tattoo that reads “Boulder Brave.” She also got another tattoo with the initials of the 10 shooting victims.

A chain-link fence is still up around the parking lot of the King Soopers. Recently, employees had an opportunity to go inside the store again.

“Unbelievably grateful is all I could say,” said Smith. “No one should have to go through this.”

It will take more time before the store reopens to the public. When it does, fear will not keep employees away.

Smith said he plans to return to work at King Soopers.

“To be a part of the family again. To stay strong is what I value most and that is why I would return,” said Smith.

Giffen said she will fly to Colorado to be there for the reopening, too.

“Boulder is a good place and this guy is not going to ruin it for us,” she said.

All nine civilians who were killed when the gunman opened fire were killed prior to police arriving at the store, prosecutors said in late April.

Boulder Police Officer Eric Talley, who was among the first three officers to enter the store on Table Mesa Drive, is the 10th victim of the shooting.

The suspect now faces a total of 54 counts related to the March 22 shooting.

He had previously faced 10 counts of first-degree murder and one count of attempted murder. Prosecutors filed a motion to amend the charging document this week and it now has a total of 54 charges which include the following:

About 115 people were inside the store when the shooting began and another 25 were in the parking lot, according to prosecutors.

Below is a list of the victims as they’re named in the charging document:

RELATED: ‘They represent victims who have a right to be heard’: King Soopers shooting suspect charged with 54 counts

Rockies start May with lopsided win over Diamondbacks

Rockies start May with lopsided win over Diamondbacks