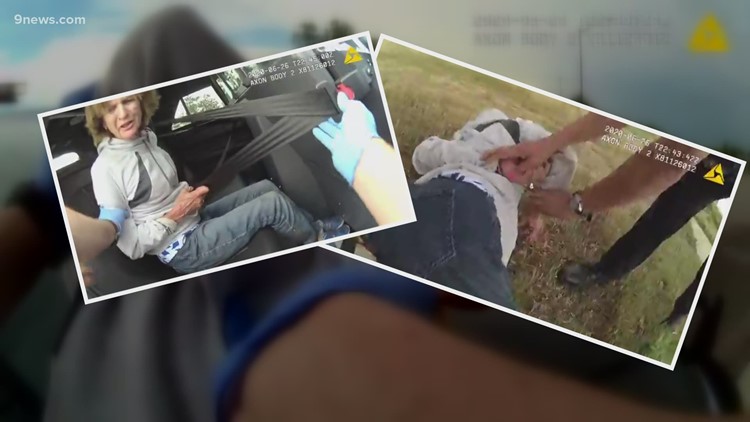 The protest on Saturday comes after the arrest of the 73-year-old who suffers from dementia.

LOVELAND, Colo. — People gathered Saturday afternoon at the Loveland Police Department to demand criminal charges for the officers who injured a woman suffering from dementia by forcing her to the ground during an arrest last June.

The protest started at noon at Loveland Police headquarters and was organized by Longmont resident Morgan Goldschmidt.

“This incident I think really exposed a culture within the police department and that’s something that needs to be addressed all over the nation,” Goldschmidt said on Saturday.

Organizers of the protest asked participants to wear purple to support those who suffer from elder abuse and to come “armed with flowers.” Karen Garner, 73, was picking flowers when officers arrested her.

RELATED: ‘We failed and we are very sorry’: 3 Loveland police employees no longer with department after Karen Garner arrest

Loveland resident Valerie Lutes carried a purple umbrella in honor of Garner. Sewn to the edges of the umbrella were hand-written signs that called for justice.

“When I saw the video I was angry and disappointed and so sad,” Lutes said. “Everybody has a grandma, everybody has a mom. We’ve seen it happen all over the place and it just hits home.”

Garner sustained multiple injuries during her arrest, according to a civil lawsuit filed in the case. It says she was left for hours at the jail without medical attention despite having obvious injuries.

Loveland Police Chief Bob Ticer said Friday that the department no longer employs three employees involved in the arrest and booking of Garner:

Ticer did not specify whether the employees were fired or resigned, but he said he was involved in that “process” along with human resources at the department. Tom Hacker, a spokesperson for the Loveland Police Department, later confirmed to 9Wants to Know that the three employees had resigned.

“We failed, and we are very sorry for that,” Ticer said. “What you saw on the video was not the Loveland Police Department. It hurt to see that.”

Garner was arrested last summer while walking home along Mountain Lion Road after visiting a nearby Walmart where she had attempted to leave without paying for about $14 worth of items, the lawsuit says. Walmart employees escorted her back inside and took the items, which Garner offered to pay for, but the employees refused, the lawsuit says.

Footage of Garner’s arrest on June 26, 2020, was released by attorney Sarah Schielke, who filed a federal civil rights lawsuit on behalf of Garner.

The lawsuit alleges that Garner was forcibly pushed to the ground and that during the arrest she suffered multiple injuries including a broken arm and dislocated shoulder.

Schielke released a second video she said shows the three arresting officers watching body camera video of Garner’s arrest, laughing and celebrating the excessive force, and fist-bumping the fact that one of the officers intimidated a citizen who had stopped to make a complaint.

Once protesters arrived at the police department, they placed flowers at the front doors in honor of Garner.

The Larimer County District Attorney’s Office announced there would be an independent investigation of the incident.

>> The protesters’ demands for the Loveland Police Department are listed here.