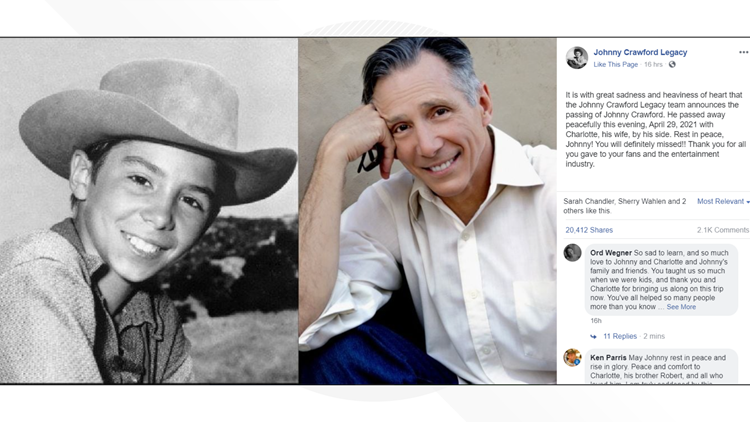 Crawford was one of the original Mousekeeters in “The Mickey Mouse Club” and received an Emmy Award nomination at the age of 13.

Johnny Crawford, known for his role as Mark McCain in the ABC series “The Rifleman,” died Thursday at the age of 75.

Crawford was nominated for an Emmy Award for his role in the series at the age of 13 in 1959.

Crawford was born in Los Angles to a theatrical and musical family. It led him to early fame as one of the 24 original Mouseketeers in the first season of “The Mickey Mouse Club.”

Crawford continued acting, but also had a brief stint in the 1950s and 1960s as a recording artist. He generated four Billboard Top-40 hits, including “Cindy’s Birthday” and “Rumors.”

Later in life Crawford made appearances in shows and films including “Hawaii Five-O,” “The Naked Ape,” “The Lone Ranger” and “The Count of Monte Cristo.”

My dear friend #JohnnyCrawford just passed away. I pray for his wife Charlotte as she was by his side. Johnny was a real cowboy and will be greatly missed. He was an original Mickey Mouse Club member and played the son on The Rifleman. pic.twitter.com/oNKeC5Ouac

Crawford had been battling Alzheimer’s disease since 2019. At the time, friend and actor Paul Petersen started a GoFundMe to help Crawford’s family cover medical expenses. He was living in a memory care residence, but was moved to a smaller care home closer to his wife after he contracted COVID-19 and then pneumonia, his family said. It’s unclear when over the past year he got COVID-19.

“We are grateful for the outpouring of love and support from friends and fans around the world,” his family posted on his website. “Johnny touched so many people, through his music and his performances, and we are truly blessed that they remain as his legacy.”

Crawford is survived by his wife Charlotte and brother Bobby.

The pandemic made 2020 taxes more complicated. What to know before you file