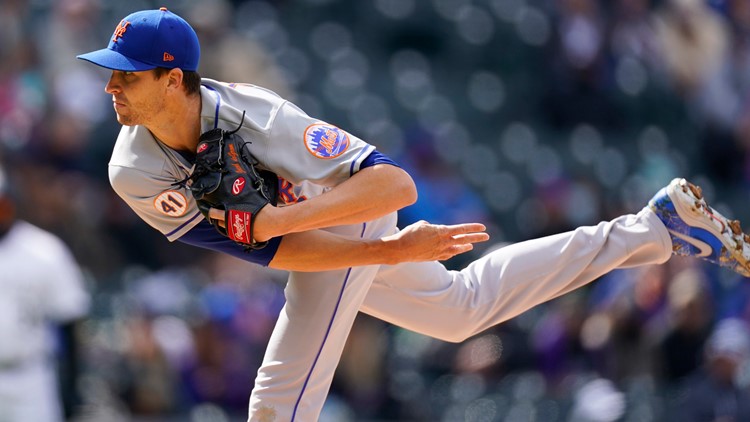 Colorado was defeated 4-3 by New York in the first game of Saturday’s doubleheader.

DENVER — New York Mets pitcher Jacob deGrom struck out nine straight batters against Colorado on Saturday, falling one shy of matching Tom Seaver’s major league record, and finished with 14 strikeouts in a 4-3 win over the Rockies in a doubleheader opener.

Coming off a 14-strikeout performance in a 3-0 loss to Philadelphia, deGrom became just the ninth pitcher to strike out as many as nine in a row.

The streak ended in the fifth inning, when the Rockies took a 3-1 lead with three unearned runs, but the Mets rallied to win a series opener delayed a day by snow when pinch-hitter Jonathan Villar hit a tying double off Daniel Bard (0-1) in the seventh inning and Dominic Smith had a sacrifice fly.

Pete Alonso had homered in the sixth to pull the Mets within a run.

By winning the opener of a doubleheader of seven-inning games under coronavirus protocols, the Mets extended a winning streak to four for the first time since 2019.

DeGrom (1-0) allowed three unearned runs and three hits in six innings and walked one, lowering his ERA to 0.45.

He started the streak with a called third strike against Josh Fuentes for the first out of the second inning, then got Sam Hillard and Dom Nunez swinging.

He struck out Chi Chi González, Raimel Tapia and Ryan McMahon in the third, and Trevor Story, Charlie Blackmon and C.J. Cron in the fourth.

RELATED: Rockies game on Friday postponed due to weather

Fuentes grounded an 0-1 pitch leading off the fifth and reached on a throwing error by second baseman Jeff McNeil, ending the streak.

Detroit reliever Tyler Alexander was the previous pitcher to strike out nine in a row, accomplishing the feat last Aug. 2 against Cincinnati.

Seaver set the record against San Diego on April 22, 1970, striking out his final 10 batters in a 19-strikeout performance.

Colorado took a 3-1 lead against deGrom later in the fifth when Nunez hit an RBI triple, pinch-hitter Yonathan Daza hit a sacrifice fly and Tapia homered. All three runs were unearned because of McNeil’s error.

Edwin Díaz struck out the side for his first save this season.

RHP Marcus Stroman (2-0) starts for the Mets on Sunday and RHP Antonio Senzatela (1-2) for the Rockies.