How best to counter the virus of disinformation on vaccines?, Opinion News & Top Stories

by admin3
in Opinion
0

Early this month, a person claimed in a Facebook post that his cousin, a renowned doctor at a private hospital in Singapore, had suffered a stroke as a result of getting a Covid-19 vaccine.

That post went viral, including on WhatsApp and social media chats, prompting Mount Elizabeth Hospital to issue a clarification on April 4.

“We wish to clarify that the allegations in the post are untrue. The doctor’s family has also confirmed that the writer is not related to them and has written to Facebook to have the post removed,” the hospital said. “You can help us stem the circulation of false information by not sharing the post, and deleting it if you have already done so.”

A few days later, another vaccine-related post went viral. This time, the death of an 81-year-old man in Singapore was attributed to his receiving the Covid-19 vaccine.

Again, the claim was circulated online and in chat groups.

A week later, the Ministry of Health (MOH) addressed both falsehoods in detail – and invoked Pofma, the Protection from Online Falsehoods and Manipulation Act, to require two Facebook pages and a website to publish correction notices.

The posts – on two Facebook pages managed by opposition People’s Power Party chief Goh Meng Seng – and the article, on the Singapore Uncensored website, now carry a note saying that they contain false statements of fact. The note also states that for the correct facts, readers should click through to the clarification here.

MOH said, among other things, that as at April 14, “there is no credible evidence for an increased risk of heart attack or stroke with the Pfizer-BioNTech and Moderna Covid-19 vaccines which are currently approved and offered in Singapore”.

In the case of the doctor, the medical team caring for her assessed that her current condition is highly unlikely to be related to the Covid-19 vaccination, said MOH.

As for the 81-year-old man, he died of ischaemic heart disease – lack of blood circulation to the heart muscles.

But sentiments aligned with those posts continue to be held – and aired – by a minority online and offline. 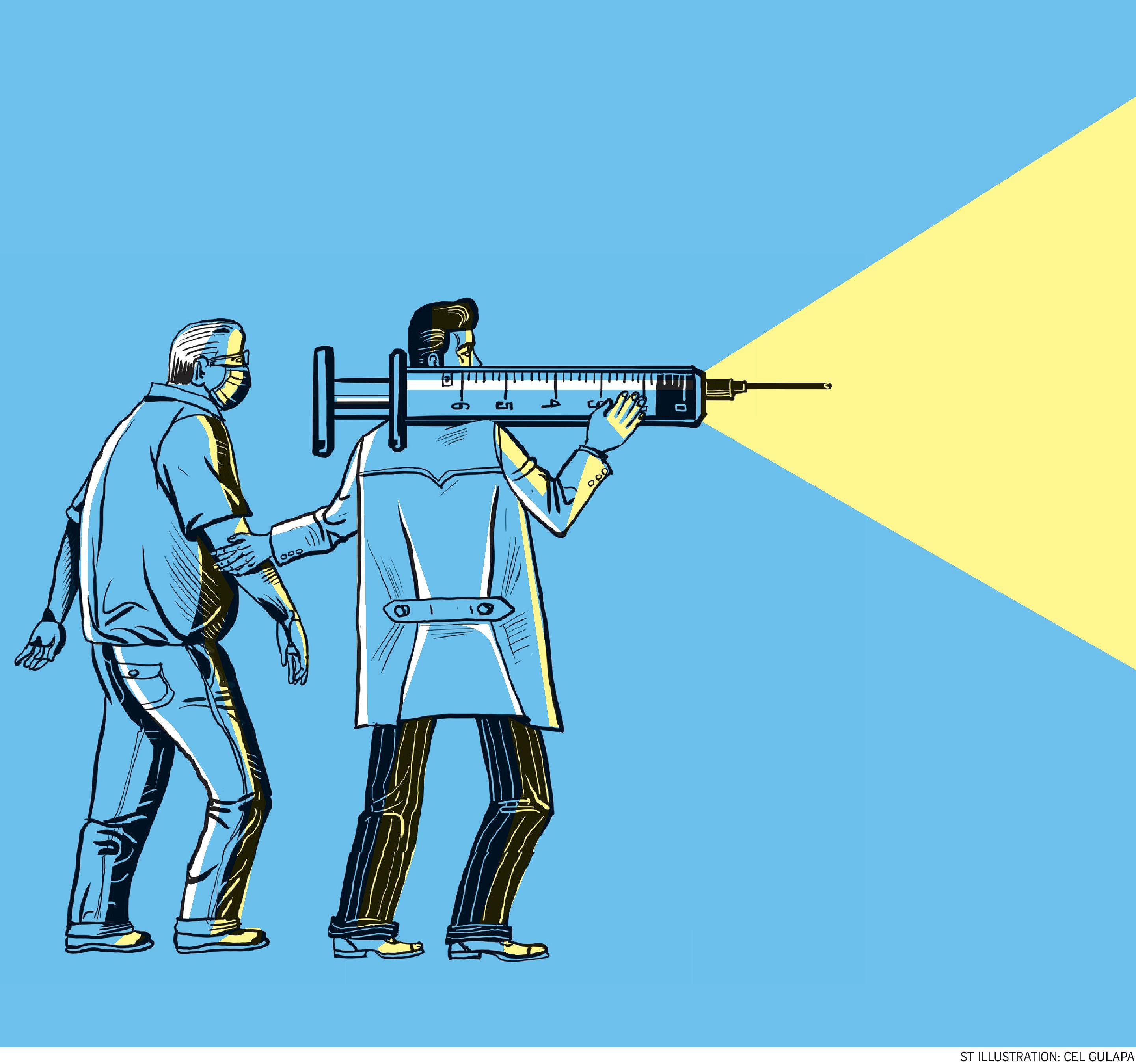 On Facebook and in chat groups, these sceptics decry the attempt to shut out “the truth” and alternative views, never mind the facts, let alone global scientific consensus.

And I fear they are not likely to be swayed any time soon, in Singapore or around the world.

The risk is that such views gain ground, and traction, at a time when the global vaccination drive is key to recover from the pandemic.

How best can such disinformation about the virus and vaccines be countered?

Going to the ground

Ground engagement is critical, for starters.

Globally, more than 850 million shots of a Covid-19 vaccine have been administered. Singapore’s vaccination programme is well under way, with more than one million people having received their first dose of either the Pfizer or Moderna vaccine, and over 500,000 having completed their full vaccination regimen.

As in every society, there remain a minority of individuals who are hesitant or have doubts about the vaccines, for a variety of reasons, and a host of efforts are ongoing to allay concerns that groups like seniors may have.

Some of their worries are fed by misinformation – which is generally purveyed through informal networks like chat groups and friends.

Researchers have noted that some of this false information is shared within closed networks out of genuine concern, or a lack of knowledge.

On-the-ground engagement, and campaigns to address doubts they may have, are necessary and helpful in assuaging these worries.

Public education on sifting out dubious information may also help people be more discerning of what they read.

As Professor Nicholas Gascoigne from the National University of Singapore’s Yong Loo Lin School of Medicine told my colleagues for an article published earlier this month, vaccine hesitancy stems from some genuine issues, but also from a lot of misinformation or prejudice. Some have called vaccines experimental since they have been approved much faster than people are used to, but, in fact, they have been rigorously tested and found safe, he noted.

Raising public awareness of the agendas of those purveying falsehoods is also important.

There will be a number of individuals who subscribe to – and spread – disinformation on the vaccines.

Observers note that these anti-vaxxers spend a disproportionate amount of time online and on social media, where they imbibe material that reinforces their beliefs, generally along these lines: Covid-19 is not dangerous; Covid-19 vaccines are dangerous; scientists (and governments) cannot be trusted.

What is particularly disturbing is that most of this disinformation can be traced back to – and appears to be deliberately manufactured by – a small group of anti-vaccine activists, aided by social media platforms and their algorithms that amplify viral content.

Recent reports by the Centre for Countering Digital Hate (CCDH), a think-tank based in Britain and the United States focusing on disinformation efforts, shed some light on this industry that has enabled anti-vaccine activists on Facebook, YouTube, Instagram and Twitter to reach over 59 million followers.

While these platforms say they have policies to prevent the spread of vaccine misinformation, the centre found in its latest report last month that “all have been particularly ineffective at removing harmful and dangerous misinformation about coronavirus vaccines, though the scale of misinformation on Facebook, and thus the impact of their failure, is larger”.

“Further, they have all failed to remove the accounts of prominent anti-vaxxers who have repeatedly violated their terms of service.”

Dubbed the Disinformation Dozen, these 12 anti-vaxxers – some of whom are entrepreneurs peddling alternative medical treatments – play leading roles in spreading digital misinformation about Covid-19 vaccines, aided by their large following, high volumes of anti-vaccine content and rapid growth of their social media accounts. Among their more extreme claims: that Bill Gates plans to inject everyone with microchips as part of the vaccination programme.

The CCDH says the best way to stop such content is to deny it a platform. Users should also be given warnings when attempting to follow links to sites known to host vaccine misinformation, and those viewing misinformation should be shown corrections – not unlike under Pofma.

In an article in Nature Medicine published last month, CCDH chief executive Imran Ahmed noted that anti-vaxxers have been training one another in identifying potential targets online.

“They discuss their tactics for deepening people’s fears, sowing doubt as to whether people should take a vaccine, deepening vaccine hesitancy, and converting the chosen few into fully fledged anti-vaxxers – the people who further propagate the lies,” he wrote. “Anti-vaxxers distribute themselves across social media, finding new and varied ways to inject misinformation into users’ news feeds.”

While this was taking place even before Covid-19, the pandemic and the swift global roll-out of vaccines were seen as an opportunity to grow their reach.

It is far more helpful and effective for people to instead share good information about vaccines from trusted sources, Mr Ahmed suggests. They could also post their photos and clips of their vaccinations, to encourage their circles and show that there is nothing to fear, he adds.

While doctors and governments need to convince the vaccine-hesitant to take a specific course of action, anti-vaxxers need only to persuade them to do nothing, he notes. “All they need to do is raise doubt.”

Observers have also called on tech companies to do more to act on such falsehoods, but the nature of the beast may be that such disinformation is more likely to keep popping up, including on new and alternative platforms.

In a note this month, National University of Singapore business school visiting senior fellow Alex Capri pointed out that Russia allegedly engaged in digital disinformation operations to undermine confidence in Pfizer’s and other vaccines produced in the US and Europe.

This was done not only to promote its own vaccine, the Sputnik V, but to sow confusion and mistrust among citizens of its chief protagonists.

At the same time, China’s “wolf warriors” have painted American and European pharmaceutical companies as greedy opportunists, while depicting their governments as self-serving and callous. This narrative has resonated on both social media and traditional media in many of the world’s poorer countries, as Beijing seeks to promote its own vaccines.

Ultimately, being aware of disinformation attempts and what drives those who propagate it is only one part of the battle.

Falling back on the facts must be key. They are:

One, Covid-19 continues to pose a significant threat to Singapore and the world, as recent surges in infections in the region show.

Two, vaccines have contributed significantly to human health outcomes over the past two centuries, and continue to be among the most effective methods of saving lives from disease – and for protecting our loved ones, colleagues and the wider community from the virus.

Three, scientists and other public health professionals have played a key role in helping humanity through the years, and their decisions, from developing vaccines to ensuring they are safe to administer, aim to maximise the well-being of the general public.

And this is why scientists and public health officials the world over have worked together to ensure vaccines are safe and that there is enough to go round for everyone so that the world can emerge from the shadow of one of its worst health crises.