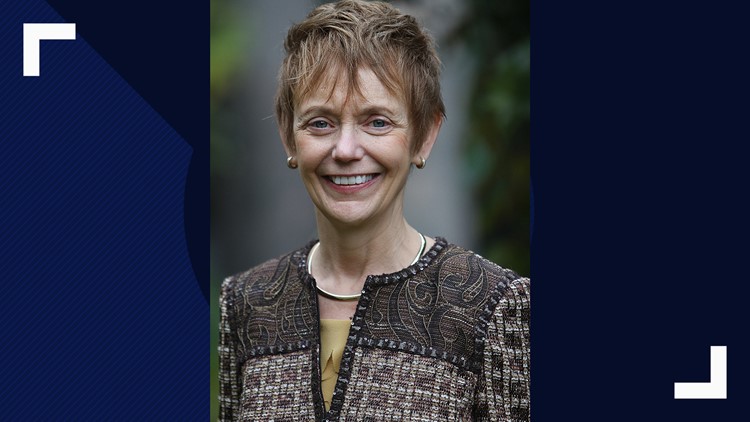 Dr. Rebecca Chopp was diagnosed with the disease in 2018, and began painting to try to slow the progression.

DENVER — Dr. Rebecca Chopp is a woman with an incredible resume.

>The video above shows a testing breakthrough, funding provides hope for Alzheimer’s research.

She decided to step down from her long and successful career in 2019 after doctors diagnosed her with Alzheimer’s Disease.

“For me, it is a diagnosis… that goes after the strongest part of myself: my brain. It’s how I made a living, and it’s what I really identify with,” Dr. Chopp told 9NEWS. “People used to joke I was a body with a brain.”

Chopp and her husband of 25 years, Frank Thibodeau, knew something was wrong when she started becoming forgetful and sleeping for hours longer than she usually would.

“I’ll never forget the diagnosis,” Thibodeau said. “We both went out to the car and we just kind of hugged each other. Then that night, we went to one of our favorite little restaurants across the street and had way too many margaritas and just cried ourselves silly.”

But then, they got to planning: How were they going to make the most of the good time they had together while trying to delay the progression of the disease as much as they could?

“I had a friend who, when she heard my diagnosis, literally flew here from New Orleans,” Chopp recalled. “She grabbed me and my sister and another friend and said, ‘you’ve got to learn to paint, you have Alzheimer’s, it will help you!’ My doctor said the same thing.”

She began painting, along with other activities like working out for hours every day and singing.

Two of her paintings were actioned off at The Alzheimer’s Association’s Purple Gala the last weekend of April.

“Early detection for us was a good thing,” Thibodeau said. “It pulled her out of a high-stress job and into an environment where she could take care of herself, and we would have time to do things that we wanted to do.”

“We’ve got to get the word out, and for us to be able to do that before my symptoms are more progressive, it’s so important,” Chopp said. “It’s really a calling for us.”

For anyone who may need help who has been diagnosed with Alzheimer’s or is taking care of someone with the disease, the Alzheimer’s Association of Colorado has a variety of resources, including their 24/7 Helpline staffed by trained professionals: 800-272-3900

RELATED: Majority of Coloradans hospitalized for COVID-19 right now are younger than 60