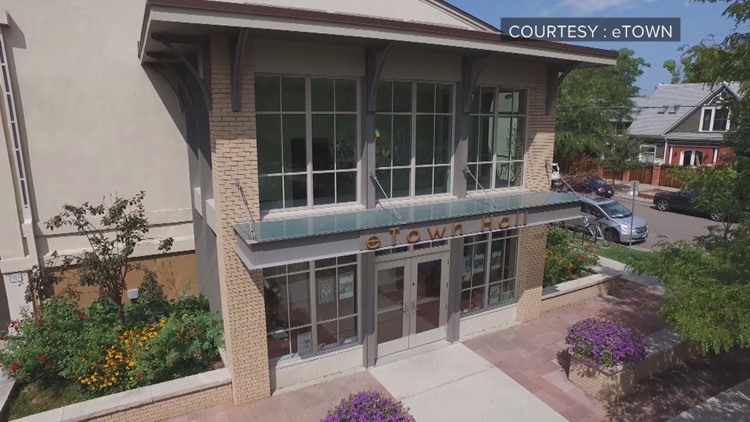 The world-renowned radio show from Boulder is also being inducted into the Colorado Music Hall of Fame.

BOULDER, Colo. — An old church near downtown Boulder is the home of the national radio show that will be recognized in the Colorado Music Hall of Fame this week.

Thirty years ago, eTown began. It was the dream of Nick and Helen Forster, who recognized the power of music in bringing people together.

Over the past three decades, the show, which is featured on 300 radio stations, has included hundreds, if not thousands of musicians. Everyone from Pops Staples to James Taylor, Michael Franti, Lyle Lovett, Willie Nelson, Billy Strings, Greensky Bluegrass, Leftover Salmon, Los Lobos and so many more.

They’ve featured big names, upcoming artists, non-musical guests and world-famous anthropologists. Jane Goodall has been there, so has former President Jimmy Carter. All with one goal: to call attention to challenges like social injustice and environmental issues like climate change.

“We have not changed the world completely,” Helen Forster said, “But we’ve let a lot of people have some food for thought”.

Nick Forster said if nothing else, eTown has brought attention to issues like climate change.

“When we started we talked about climate change, and people were just inviting us to stop. ‘Would you shut up and play music?’ But there are very few people these days who aren’t aware of that,” he said. “They may not believe it, they may not trust it, they may not know about it in detail, but it’s commonplace now which it wasn’t 30 years ago.”

For the first 20 years, eTown did the shows at the Boulder Theater. But when the old church a few blocks away became available, Nick Forster said it was a perfect fit. It includes not only the stage and audience area complete with church pews, but also a community room.

“Having e-Town, this solar-powered community center, media making machine in the middle of town, it really made eTown real,” he said. “And what’s great for Helen and me after 30 years, we now know that eTown is going to last well beyond us. Be something that will benefit our community for a long time to come.”

Because of COVID-19, a virtual show will celebrate the 30th anniversary on April 22, with performances by many of the musicians that have been featured for so many years.

Former U.S. Senator and environmental advocate Tim Wirth will also be there. During the program, eTown will be inducted into the Colorado Music Hall of Fame. To watch, and for more information check out eTown.org.

RELATED: Positively Colorado: Yes, there were ballparks in Denver before Coors Field

This person’s job is to police the Boulder Police Department

This person's job is to police the Boulder Police Department

Pandemic a long way from being over, ST Editorial News & Top Stories