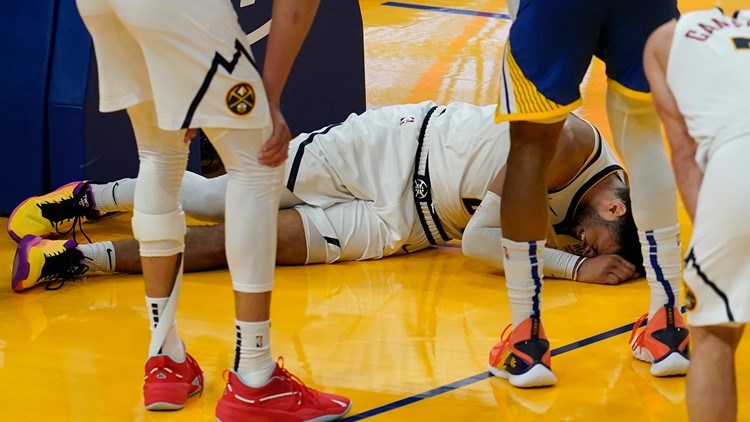 Murray was in visible and agonizing pain on the floor after landing awkwardly on his left knee while driving to the basket.

SAN FRANCISCO — The Denver Nuggets lost to the Golden State Warriors on Monday night, but the game immediately became an afterthought.

With just under a minute to go in the fourth quarter, star point guard Jamal Murray drove to the hoop and landed awkwardly on his left knee. In what looked to be a non-contact injury, Murray immediately was in agonizing pain under the Warriors’ basket.

After several minutes, he was helped off the floor, declining a wheelchair to take him away but unable to put any pressure on the knee when heading to the locker room.

Murray had missed Denver’s previous four games with right knee soreness, but this was the opposite leg.

Nuggets head coach Michael Malone said after the game Murray will get imaging on the knee, but didn’t have an update on the severity of the injury.

“(It’s) obviously a very down locker room. Yes we lost the game, but I think everyone’s thoughts are with Jamal,” Malone said.

Nikola Jokic had 27 points for the Nuggets and Michael Porter Jr. had 24, but the night will be remembered for what happened to Murray.

Denver is scheduled to be off tomorrow before playing against Miami at Ball Arena on Wednesday night.

Jamal Murray was helped off the court after an apparent knee injury with 50 seconds left against the Warriors. pic.twitter.com/sz7akzOiq4

Jamal Murray left the game after an injury to his left knee pic.twitter.com/ddEEMg9A4c

>>Video at top of story: What has the addition of Aaron Gordon meant to the Nuggets? | Locked On Nuggets


> Top stories curated daily just for you! Sign up for the 9NEWSLETTER to get can’t-miss stories, Next and Denver Broncos content, weather and more delivered right to your inbox.

ROKU: add the channel from the ROKU store or by searching for KUSA 9NEWS.

For both Apple TV and Fire TV, search for KUSA “9news” to find the free app to add to your account. Another option for Fire TV is to have the app delivered directly to your Fire TV through Amazon.

> Top stories curated daily just for you! Sign up for the 9NEWSLETTER to get can’t-miss stories, Next and Denver Broncos content, weather and more delivered right to your inbox.

Why Puerto Rico Is a Tempting Covid Getaway