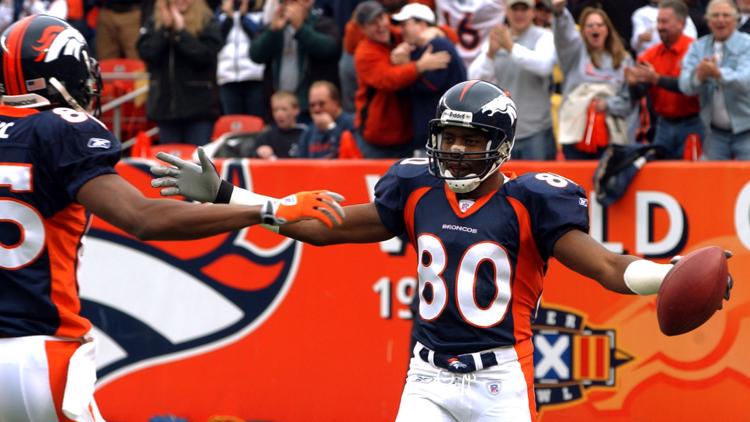 DENVER — Not surprisingly, former Denver Broncos receiver Rod Smith is not a fan of the current Broncos players electing to hold out from team-organized voluntary offseason workouts.

Although Smith last played 15 years ago, he remains the Broncos’ all-time leading receiver in catches, yards and touchdowns. He is a Ring of Famer who was known for most of his career as the one player who would never miss an offseason workout.

So what does Smith think about the Broncos’ players stating this week they will not attend the offseason workouts that were to begin Monday?

“I would never,’’ Smith said in a text to 9NEWS. “I went to over 600 straight voluntary workouts. That’s why career lasted as long as it did and I consistently played at a high level.”

> Video above: Mike Klis on why the Broncos voted to skip offseason workouts.

The Broncos were the first team to back out of the offseason program, ostensibly out of COVID concerns although the players statement also mentioned “the quality of play across the NFL was better than ever by almost every measure,” an indication the players don’t believe an offseason program, as its currently constituted, is necessary.

The NFL modified its offseason program so that it doubled the Phase I conditioning phase from two weeks to four weeks, shrunk Phase II from 3 weeks to one week and will have team meetings go virtual in those periods. Additionally, the Broncos revealed their own vaccination program for coaches, players (voluntary), staff and their wives.

Despite this, Broncos players received more support Thursday from Bears and Browns players, who along with the Seahawks, Patriots, Lions and Bucs announced most or all of their players would not participate in the offseason program.

Brandon McManus, the Broncos’ player rep, said Wednesday it would be possible for players to reverse their position although the union remains unsatisfied with the league’s latest COVID protocols.

As of Thursday afternoon, Broncos’ players had yet to reconvene for a vote.

With Courtland Sutton coming back from an ACL injury, and Tim Patrick proving last year he was a capable No. 1 or No. receiver in Sutton’s absence, plus last year’s drafted Jerry Jeudy, KJ Hamler and Tyrie Cleveland entering their second season, the Broncos’ receiver depth chart has pushed DaeSean Hamilton too far back, at least on paper.

With Hamilton also hitting his play-time escalators that will push his 2021 salary to about $2.2 million, there is incentive for the Broncos to see if they can move the fourth-year receiver in return for a draft pick. The NFL Network reported Thursday that Hamilton is expected to be on the trading block once the NFL Draft takes place in two weeks.

He is also the team’s best receiver run blocker, a big reason he played 57 percent of the offensive snaps the past two years despite limited targets.

The Broncos officially got back one of the NFL best returners when exclusive rights free agent Diontae Spencer signed his one-year, $850,000 tender. It’s the minimum salary for players with two years of service time.

Spencer ranked No. 2 in punt returns last year with a 15.8 yard average thanks largely to an 83-yard touchdown return at Carolina. He was No. 3 in kickoff returns in 2019 with a 29.1-yard average.

The Broncos are expected to sign two other exclusive rights free agents – swing offensive tackle Calvin Anderson ($850,000) and back up safety Trey Marshall ($920,000, or the third-year minimum salary) – in the coming days.

The Broncos held a virtual Diversity, Equity & Inclusion Career Huddle program Thursday featuring minority and female employees on three panels. The keynote speaker was Ring of Fame safety Steve Atwater. Brittany Bowlen, a vice president of strategic initiatives who is line to one day replace her late father Pat Bowlen as the Broncos’ controlling owner — providing the team isn’t sold — and Broncos’ salary cap/contract boss Rich Hurtado, were among those on the panels.

Black Pumas to perform at Mission Ballroom in Denver, Colorado

Black Pumas to perform at Mission Ballroom in Denver, Colorado