Dr. Barron on vaccine side effects: “One day without having a workout, one day of maybe having to be a couch potato, versus however many days in the hospital.”

ENGLEWOOD, Colo — Before Brittany Bowlen can take charge of the team, it helped to put her in charge of something else.

To help train her to one day sit in her late father’s chair as Broncos’ controlling owner, Chief Executive Officer Joe Ellis put Brittany Bowlen in charge of the team’s COVID-19 task force last year. Her responsibility led her to organize a team-wide vaccination program that began Wednesday with more than 150 Broncos employees, football staff, coaches, players and family members getting their first Pfizer vaccine shot.

Was heading the COVID-19 task force, which also included setting up virus protocols at the stadium for game day and team’s UCHealth Training Center for practice, a step toward training Brittany Bowlen to one day take control of the Broncos’ organization?

“Today, we’re really here to talk about the vaccines, but it’s no secret to any of you this is my dream job,’’ Brittany Bowlen said in a Zoom press conference she shared Wednesday with UCHealth senior director Dr. Michelle Barron. “I want to have a career in football. I’m going to do everything to make that possible. And (heading the) COVID (task force) has opened many doors for me, to allow me to have that career, have this opportunity and champion my colleagues and work with them. They have been incredibly supportive and I’m looking forward to continuing this journey together.”

> Video above: Brittany Bowl at the reopening of the Darrent Williams Boys & Girls Club 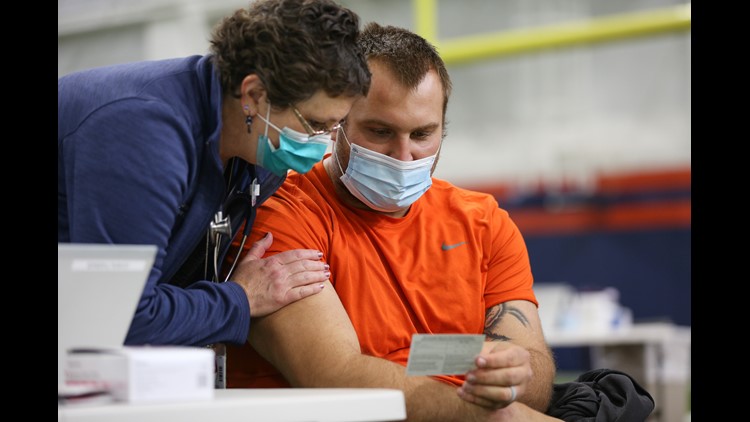 Brittany Bowlen’s father Pat Bowlen was the Broncos’ owner from March 1984 until Alzheimer’s forced him to transfer control of the team to the Pat Bowlen Trust in July 2014, at which point Ellis became the team’s CEO and president. Bowlen died in June 2019 from complications of Alzheimer’s.

Ellis and two other trustees of the Pat Bowlen Trust, Rich Slivka and Mary Kelly, are serving as stewards of Bowlen’s long-stated wishes that he wanted one of his seven children to eventually run the team. The trustees have identified Brittany as the likely heir to the Broncos’ controlling owner position.

However, Pat Bowlen’s two oldest daughters from his first marriage, Amie Klemmer and Beth Bowlen Wallace, are challenging their father’s trust in court, stating their father was not of capacity when his trust’s final amendment was executed in 2009. The trial is set for July 12 in Arapahoe County Court.

In the meantime, Brittany Bowlen has been working in the Broncos’ front office as vice president of strategic initiatives. When the virus pandemic shut down the world in March 2020, Brittany Bowlen was put in charge of the team’s COVID-19 task force.

It’s unclear how many players received the vaccine Wednesday. Like the general population, there has been concern about the reported side effects, especially reports of how people have been getting sick for 24 hours after receiving the second vaccination shot.

“The way I approach that question, because it’s not inconsequential to lose a day of your life – getting COVID is far worse,’’ Dr. Barron said. “COVID can have long-term effects even if you’re young and healthy. Some people continue to have fatigue, have headaches, have memory loss. So it’s not a walk in the park. People get COVID, get hospitalized and die.

“So one day without having a workout, one day of maybe having to be a couch potato, versus however many days in the hospital … or the potential for dying, I think for most people it winds up being a very easy choice.”

What next for Afghanistan’s neighbours?, Opinion News & Top Stories

AI Experts Even More in Demand as Economy Opens Up

AI Experts Even More in Demand as Economy Opens Up

Much still to deal with after Cabinet reshuffle, ST Editorial News & Top Stories