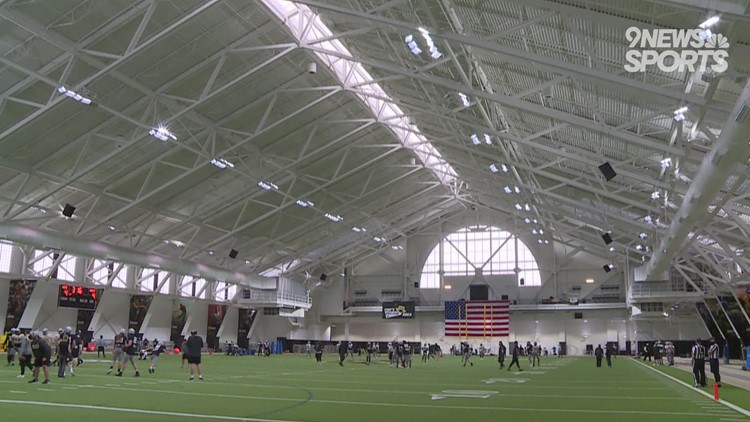 Injuries to both sides of the ball allow for other players to step up and stand out.

BOULDER, Colo. — For the second consecutive week, the Colorado Buffaloes defense flexed its muscles in the spring scrimmage.

“We’re pretty confident that we’re not going to allow them into the end zone, which I think we’ve shown through the last few practices and here today,” Ray Robinson said.

The sophomore from Highlands Ranch switched from linebacker to safety this year, taking starting reps at today’s scrimmage.

Their defense is looking at a vast turnaround from the 2020 team that allowed 31 points and 420 yards per game, inflated of course, from the Alamo Bow, in which the Buffs allowed 638 yards in the 55-23 loss to Texas.

“We really wanted to make our system on defense a lot more player friendly, in other words, don’t make it too hard,” head coach Karl Dorrell said. “It’s still a game of football, it’s still 11-on-11, and guys doing their responsibilities and playing hard and getting to the football with pursuit and making tackles, so we wanted to simplify that process.”

Injuries are still hampering both sides of the ball. The most notable, of course, is senior linebacker Nate Landman. He suffered an Achilles rupture in the loss against Utah, and will remain sidelined until fall camp. On the offensive side of the ball, quarterback Sam Noyer is rehabbing a shoulder surgery. His absence however, is paving the way for more opportunities under center.

“Brandon Lewis had a great bowl game. I was so proud how he stepped in the game and his first time having live playing time on national TV, he goes out there and plays one of his best games,” Dorrell said. “If we thought he would’ve played that way before, we would’ve played him a lot earlier in the season.”

It helps to have a stacked backfield. Alex Fontenot is back from his own injury, and stole the spotlight this week at practice. The junior has some company and competition though, with the returning Pac-12 Offensive Player of the Year Jarek Broussard breathing down his neck.

“He was one of those guys that I’m not sure we could’ve forecasted that production from him, but he earned every bit of it because he had a great training camp,” Dorrell said of Broussard. “Now that Alex [Fontenot] is back, and we’ve got Joshia Davis, and Ashaad Clayon and Jayle Stacks, we just have a lot of great, quality players at the running back position.”

These are the COVID-19 restrictions in Colorado counties