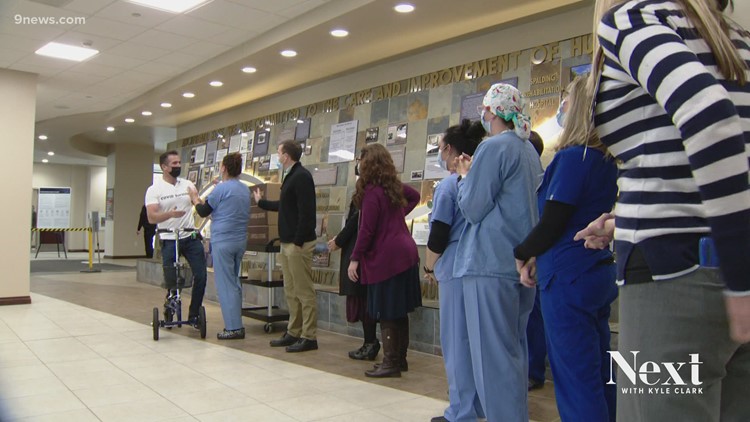 Jason Jahanian returned to the Medical Center of Aurora to thank the doctors who saved his life.

AURORA, Colo. — On paper, Jason Jahanian isn’t the person you would expect to nearly die from COVID-19.

The 41-year-old was an avid runner. He had no pre-existing medical conditions. But, after he started having symptoms of the disease caused by the novel coronavirus on March 23, 2020, he became critically ill, and spent two weeks in the ICU of the Medical Center of Aurora. Doctors gave him a 20% chance of survival.

RELATED: COVID-19 survivor reflects on life before the virus, looks forward to a new life after

RELATED: She survived the Holocaust. Now, she’s getting the COVID-19 vaccine

He spent two weeks in a coma, and April 16, 2021 marks one year to the day that he opened his eyes for the first time. To mark this anniversary, he returned to the Medical Center of Aurora to thank the doctors who saved his life.

“You gave me my life back,” Jahanian said when he brought an entire tray full of food for lunch to hospital staff. “You gave me everything I have today.”

Doctors said Jahanian’s will and desire to live brought him back to health. During his recovery, he’s been able to run two half marathons and even break his leg riding motocross.

Watch the video above to see Jahanian’s reunion with hospital staff.

SUGGESTED VIDEO: Full Episodes of Next with Kyle Clark


9NEWS will live stream the news conference in the video player above, on 9NEWS streaming devices, on the 9NEWS YouTube channel and on the 9NEWS app.

Colorado state trooper injured in crash on I-70