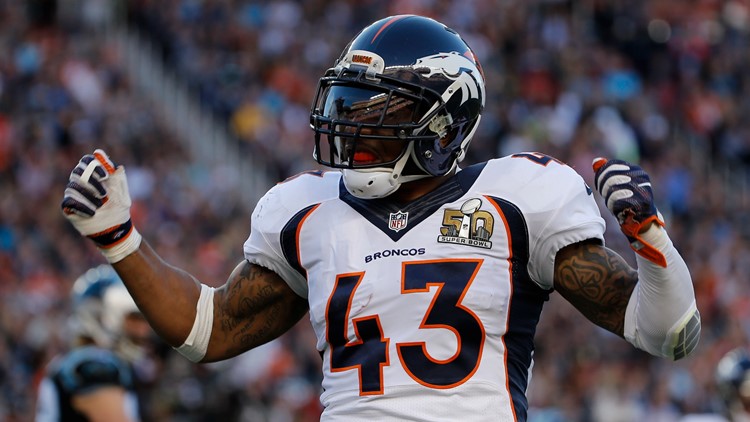 Ward was a key member of Broncos’ Super Bowl 50 defense. He last played in 2017 for Tampa Bay.

“For everything this game has brought me I am forever grateful, to the fans I gave my all to, to the teams I gave my all to,’’ Ward wrote on his Twitter account. “To my family who gave their all to me through the ups and downs, I thank you from the  bottom of my heart. Blessed 8 years!”

The announcement itself was a surprise as Ward had not played in four years – since 2017 with Tampa Bay. But Ward, 34, had stayed in shape in recent years in hopes he would again get a call to help out an NFL team.

During his eight years in the NFL, Ward was known as a fearless, hard-hitter who belied his smallish, 5-foot-10, 200-pound frame.

Drafted in the second round out of Oregon by the Cleveland Browns in 2010, Ward was a Pro Bowler in 2013, which helped him receive a four-year, $22.5 million contract as a free agent from the Broncos in 2014. Ward joined DeMarcus Ware, Aqib Talib and Emmanuel Sanders as the Broncos’ dream free-agent class of 2014. All four made the Pro Bowl that year.

As a team, Denver put it all together in 2015 when under first-year head coach Gary Kubiak and first-year defensive coordinator Wade Phillips the Broncos went 12-4 during the regular season, then swept the postseason with wins against Pittsburgh and New England in the AFC playoffs and Carolina in Super Bowl 50. Ward helped ice the Lombardi Trophy with a fumble recovery and stumble to the Carolina 4 yard line, setting up a touchdown run by C.J. Anderson.

The tenacious Denver defense was still very good, but not quite the same, in 2016 after losing defensive lineman Malik Jackson and inside linebacker Danny Trevathan to free agency. It also hurt that Ward’s body started to become banged up. When Ward was released as the Broncos were setting their season-opening roster prior to the 2017 season, the move upset many of his teammates, particularly his fellow No Fly Zone members Chris Harris Jr., Darian Stewart and Talib.

But even Pro Bowlers get old and Ward would only play 14 more games that season, the final 14 games of his career.

RELATED: One and only Aqib Talib speaks No Fly Zone greatness, reason for Broncos playoff slump

For everything this game brought me I am forever grateful, to the fans I gave my all too, to the teams I gave my all too. To my family who gave there all to me through all the ups and downs, I thank you from the bottom of my heart. Blessed 8 years! #wardcorp pic.twitter.com/7OofnBEReI

Fans or no fans at Tokyo Olympics? Officials to decide by June