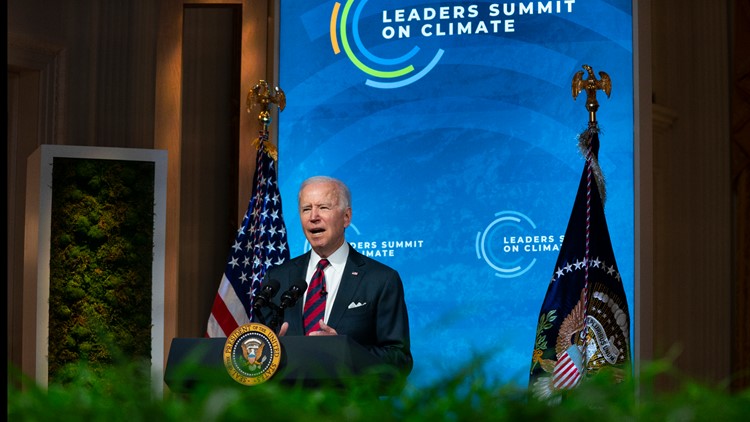 The end of the climate change summit will feature Bill Gates and Mike Bloomberg, steelworker and electrical union leaders and executives for solar and others.

WASHINGTON — he White House is bringing out the billionaires, the CEOs and the union executives Friday to help sell President Joe Biden’s climate-friendly transformation of the U.S. economy at a virtual summit of world leaders.

The closing day of the two-day summit on climate change is to feature Bill Gates and Mike Bloomberg, steelworker and electrical union leaders and executives for solar and other renewable energy.

It’s all in service of an argument U.S. officials say will make or break Biden’s climate agenda: Pouring trillions of dollars into clean-energy technology, research and infrastructure will jet-pack a competitive U.S. economy into the future and create jobs, while saving the planet.

“Climate change is more than a threat,” Biden declared on Thursday’s opening day of his climate summit. “It also presents one of the largest job creation opportunities in history.”

The new urgency comes as scientists say that climate change caused by coal plants, car engines and other fossil fuel use is worsening droughts, floods, hurricanes, wildfires and other disasters and that humans are running out of time to stave off catastrophic extremes of global warming.

The event has featured the world’s major powers — and major polluters — pledging to cooperate on cutting petroleum and coal emissions that are rapidly warming the planet.


But Republicans are sticking to the arguments that former President Donald Trump made in pulling the U.S. out of the 2015 Paris climate accord. They point to China as the world’s worst climate polluter — the U.S. is No. 2 — and say any transition to clean energy hurts American oil, natural gas and coal workers.

It means “putting good-paying American jobs into the shredder,” Senate Minority Leader Mitch McConnell, R-Ky., said on the Senate floor Thursday in a speech in which he dismissed the administration’s plans as costly and ineffective.

“This is quite the one-two punch,” McConnell said. “Toothless requests of our foreign adversaries … and maximum pain for American citizens.”

In an announcement timed to his summit, Biden pledged the U.S. will cut fossil fuel emissions as much as 52% by 2030.

Allies joined the U.S. in announcing new moves to cut emissions, striving to build momentum going into November’s U.N. climate summit in Glasgow, where governments will say how far each is willing to go to cut the amount of fossil fuel fumes it pumps out.

Japan announced its own new 46% emissions reduction target, and South Korea said it would stop public financing of new coal-fired power plants, potentially an important step toward persuading China and other coal-reliant nations to curb the building and funding of new ones as well. Canadian Prime Minister Justin Trudeau said his nation would boost its fossil fuel pollution cuts from 30% to at least 40%.

Biden was scheduled to address the summit Friday at a session on the “economic opportunities of climate action.” Leaders from Israel, Singapore, the United Arab Emirates, Kenya, Denmark, Norway, Poland, Nigeria, Spain and Vietnam also were scheduled to participate Friday, along with Biden’s transportation, energy and commerce secretaries and others.

Travel precautions under the pandemic compelled the summit to play out on livestream, limiting opportunities for spontaneous interaction and negotiation. Its opening hours were sometimes marked by electronic echoes, random beeps and off-screen voices.

But the summit opening Thursday also marshaled an impressive display of the world’s most powerful leaders speaking on the single topic of climate change.

China’s Xi Jinping spoke first among the other global figures. He made no reference to disputes over territorial claims, trade and other matters that had made it uncertain until Wednesday that he would even take part in the U.S. summit.

The Biden administration’s pledge would require by far the most ambitious U.S. climate effort ever, nearly doubling the reductions that the Obama administration had committed to in the Paris climate accord.

German Chancellor Angela Merkel was one of many allies welcoming the U.S. return after Trump.

“I’m delighted to see that the United States is back, is back to work together with us in climate politics,” Merkel declared in her virtual appearance. “Because there can be no doubt about the world needing your contribution if we really want to fulfill our ambitious goals.”

Pope Francis contributed a video from the Vatican, saying, “I wish you success in this beautiful decision to meet, walk together going forward, and I am with you all the way.”

Gaston Alfonso Browne, prime minister of Antigua and Barbuda, called for debt relief and more international assistance to recover from storms and the pandemic to prevent a flow of climate refugees. His people, he said, are “teetering on the edge of despair.”

Longtime climate policy experts, no strangers to climate summits with solemn pledges, watched some speeches with skepticism. After Brazilian President Jair Bolsonaro promised an end to clearcutting in the Amazon, Dan Wilkinson of Human Rights Watch’s environmental programs noted, “It is going to be hard for anyone to take it seriously until they actually start taking steps.”

How many got a ‘plus-up’ stimulus check Wednesday?