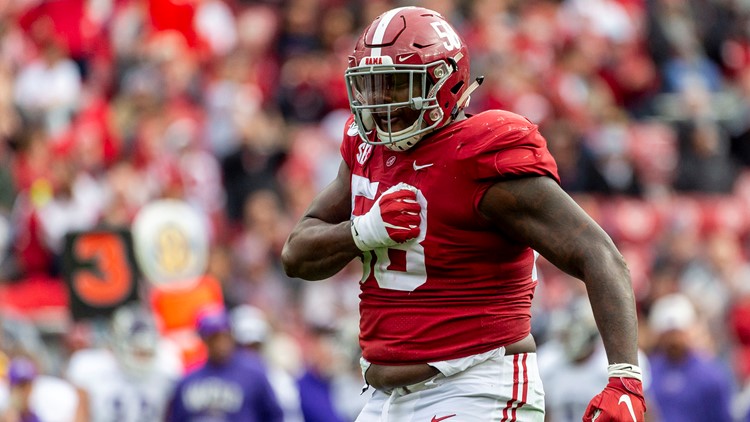 Teams still looking for a quarterback also have a few top options on the board heading into rounds 2 and 3 Friday night.

One of the best linebackers in college football, the top defensive tackles in the class and the consensus best safety are all still on the board heading into the second day of the NFL draft.

The first round was dominated Thursday night by quarterbacks (five in the first 15 picks), the Southeastern Conference (12 first-rounders) and Alabama (a record-tying six players selected).

“It just makes me feel like a proud papa,” Alabama coach Nick Saban said in an interview with the ESPN “College GameDay” crew.

The Tide matched a record set by Miami in 2004.

The Big 12 was shut out of the first 32 picks, as was Notre Dame, but that is likely to change quickly when Round 2 begins Friday.

The best and most notable players still available in the NFL draft:

Notre Dame’s Jeremiah Owusu-Koramoah was the Butkus Award winner as the nation’s top linebacker last year and maybe the most surprising player to slip out of the first round.

He’s a vicious tackler and explosive athlete, but built more like a safety than a run-stuffing linebacker at 221 pounds. His lack of polish in coverage might have scared some teams away, making him a high upside second-rounder.

Irish tackle Liam Eichenberg, who was popping up late in the first round of several mock drafts, also figures to come off the board on Day 2.


Not one interior defensive lineman was selected in the first round. That wasn’t a surprise. Alabama’s Christian Barmore is considered the best of the bunch and up-and-down play made him a borderline first-rounder.

There could be a run on the big fellas on Day 2, though, starting with the 310-pound Barmore or maybe Washington’s Levi Onwuzurike, who opted out of last season.

The only Power Five conference to produce no first-round picks Thursday night has a handful of players likely to get the call soon after the second round starts.

TCU’s Trevon Moehrig was considered the most likely safety to go in the first round, but instead that position got left out altogether. Moehrig was better in 2019 than 2020 and is light at 202 pounds but still the best bet to be the first safety selected.

Rival pass rushers Ronnie Perkins of Oklahoma and Joseph Ossai of Texas couldn’t crack a first round that had five edge players taken between 18-32, but they could keep that run going into Day 2.

If they’d prefer a center over a tackle, Oklahoma’s Creed Humphrey would be a good fit.

Pencil in either Barmore or offensive lineman Landon Dickerson, who is still recovering from a knee injury, as the next Crimson Tide player off the board.

Guard Deonte Brown and linebacker Dylan Moses are also safe bets to be drafted, though they might have to wait until Saturday and the fourth through seventh rounds.

The five quarterbacks everybody thought would be selected in Round 1 were gone by pick 15.

Texas A&M’s Kellen Mond was a four-year starter whose college career was marked by inconsistency and notable improvement as a senior when he threw only three interceptions.

Stanford’s Davis Mills is a former five-star recruit who only played 13 college games because of injuries and a Pac-12 season shortened by the pandemic. Cardinal coach David Shaw calls him the most talented quarterback he has had other than Andrew Luck.

Florida’s Kyle Trask was a Heisman Trophy finalist last season throwing to tight end Kyle Pitts, who went No. 4 to Atlanta, and Kadarius Toney, taken No. 20 by the Giants. Trask has so-so traits, but his accuracy and decision-making were impressive — at least when he had his top weapons.

The Falcons, Broncos and Lions all have top-10 picks in the second round and long-term questions at quarterback.

U.S. to share AstraZeneca shots with world after safety check