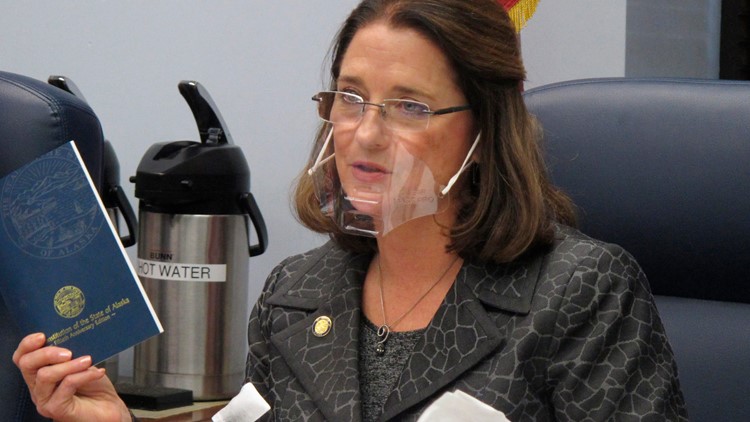 An airline spokesman said that Republican Sen. Lora Reinbold, of Eagle River, had been informed and added the suspension was effective immediately.

“We have notified Senator Lora Reinbold that she is not permitted to fly with us for her continued refusal to comply with employee instruction regarding the current mask policy,” spokesman Tim Thompson told the Anchorage Daily News on Saturday, adding that the suspension was effective immediately.

Reinbold, a Republican of Eagle River, said she had not been notified of a ban and that she hoped to be on an Alaska Airlines flight in the near future.

Reinbold told the newspaper that had been inquiring about a “mask exemption with uptight employees at the counter.”

Whoa! A source just sent this video of Sen. Reinbold at the Juneau airport. She was refusing to wear the mask and the police got involved! She’s also filming @AlaskaAir employees and asking for their names. Hyper loose. A second video is below. #akleg pic.twitter.com/EfaoSU3K9k

“I was reasonable with all Alaska Airlines employees,” she said, adding that she was able to board the flight to Anchorage.

Reinbold has been a vocal opponent to COVID-19 mitigation measures and has repeatedly objected to Alaska Airlines’ mask policy, which was enacted before the federal government’s mandate this year.

Last year, she referred to Alaska Airlines staff as “mask bullies” after being asked by flight attendants to wear a mask aboard a flight, the newspaper reported. After the incident, she reportedly sent a cake to some flight attendants bearing the inscription: “I’m sorry if I offended you.”

Alaska Airlines has banned over 500 people.

Thompson said the length of Reinbold’s ban will be determined by a review.

It wasn’t immediately known how Reinbold, who was in southcentral Alaska this weekend, would be able to get to Juneau where the legislative session resumes Monday. No other airline has scheduled flights between Anchorage and Juneau, and a ferry trip could take several days.

Lawmakers can participate in committee meetings by teleconference but cannot vote on the House or Senate floor remotely under current procedures.

These are the top 9 quarterbacks in the NFL in 2021

A Mother’s Day Gift Guide to Indulge her Hobbies