A look back at Colorado’s historic 2020 wildfire season 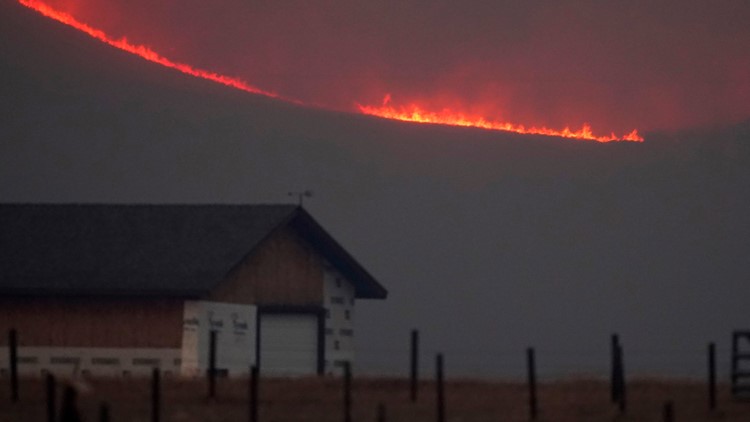 The three largest wildfires ever recorded in Colorado all happened last year: the Cameron Peak Fire, the East Troublesome Fire and the Pine Gulch Fire.

COLORADO, USA — 2020 was the most active fire season ever recorded in Colorado. The three largest-recorded wildfires in the state’s history led to the evacuation of hundreds of homes and damage to numerous structures everywhere from far northern Colorado to the Western Slope and Boulder County.

Hundreds of homes were destroyed.

Unseasonably warm conditions, a lack of moisture, overabundance of fine fuels and increased recreational traffic across the state were all credited as factors for the 2020 fire season.

Colorado saw more than 100 days of fire, and the two biggest wildfires in state history scorched a combined 400,000 acres.

“It is going to take years, not months, for us to recover,” said Reghan Cloudman, a public affairs specialist for the U.S. Forest Service (USFS).

Before the three biggest 2020 wildfires, the Hayman Fire previously held the title of largest-recorded fire in the state when it burned 137,760 acres (about 215 square miles) in 2002.

RELATED: Cleaning up after the 2020 fire season will take years, not months

Officials stressed the importance of proactively searching for and finding fires before they grow, which becomes more burdensome as fire seasons expand. Since the 1970s, wildfire seasons have increased by 78 days.

“We’re having fire years, not fire seasons,” said Mike Morgan, director of the Colorado Division of Fire Prevention and Control.

RELATED: Officials warn that 2021 has the potential to be another devastating wildfire year

>> After a record-setting year for wildfires in Colorado, the communities hit hardest are just starting to rebuild. As fire survivors work through the recovery process and the landscapes we love are restored, 9NEWS is looking at how Colorado can make communities safer. We’re examining the impacts of wildfire smoke on everyone’s health, and how to help survivors cope with the hidden scars of last year. Colorado Wildfires: From Ashes to Action will air all month long on 9NEWS.

Measuring in at 208,913 acres (about 326 square miles), the Cameron Peak Fire in Larimer County was the largest wildfire recorded in Colorado history.

It was first reported just before 2 p.m. on Aug. 13 and exploded over Labor Day weekend when it burned more than 78,000 acres.

The fire survived a September snowstorm and grew over the mountains southeast toward the foothills west of Fort Collins and Loveland, as well as near Estes Park and into Rocky Mountain National Park.

Colorado Highway 14 between Fort Collins and Walden was closed for two months.

It damaged 469 structures and 243 were considered a total loss, causing more than $6 million in market value loss, the Larimer County Assessor’s Office reported.

The cause remains under investigation.

The East Troublesome Fire in Grand County was the second-largest recorded fire in state history at 193,812 acres (about 303 square miles), and it killed two people.

Three days after the fire was first reported on Oct. 14, high winds and low humidity allowed the fire to spread to over 10,000 acres. The fire first forced the mandatory evacuation of approximately 90 homes by Oct. 17 after threatening State Highway 125.

Between Oct. 20 and Oct. 23, the East Troublesome Fire spread dramatically, with 24-hour increases of around 18,000 to 87,000 acres during the four-day run, according to fire officials.

Fire officials said the wildfire spread eastward into the Rocky Mountain National Park on Oct. 22, crossing the Continental Divide and reaching the western edge of Estes Park on Oct. 23.

It was during this period that a population of over 35,000 in Grand Lake and Estes Park were placed under a mandatory evacuation. More than 7,000 structures were threatened.

After a winter storm from Oct. 24 through Oct. 26, fire activity remained minimal until it was declared 100% contained on Nov. 30, 49 days later.

Investigators believe the origination point was northeast of Kremmling in Arapaho National Forest, but no official cause has been determined.

At 139,007 acres (about 217 square miles), the Pine Gulch Fire in Mesa and Garfield counties briefly held the title of largest-recorded fire in state history until it was surpassed by the Cameron Peak and East Troublesome fires.

First reported on July 31, the fire was sparked by a lightning strike about 18 miles north of Grand Junction.

The fire burned in remote, rough terrain in pinyon, juniper, oak and sage brush, according to the Bureau of Land Management.

It was not declared 100% contained until three months later on Dec. 18.

During its early stages, it led to evacuations in the area, closed the highway and threatened Hanging Lake.

The fire also caused a record-long, two-week closure of Interstate 70 through Glenwood Canyon between Glenwood Springs and Gypsum. It also caused continuing concerns about potential rockslides and mudslides along the burn scar.

RELATED: Hanging Lake reservations for the season to open April 1

RELATED: The Grizzly Creek Fire burned more than 30,000 acres in August. It spared the community of No Name

The lightning-caused fire began in the Mount Zirkel Wilderness about 10 miles north of Steamboat Springs.

The fire was declared 100% contained about four months later on Jan. 7, 2021. It did not force any evacuations.

The cause of the fire was determined to be human-caused.

The fire did not cause any evacuations.

The Calwood Fire, first reported on Oct. 17, was the largest-recorded in Boulder County at 10,106 acres (about 16 square miles).

The fire damaged 26 homes and led to the evacuation of nearly 3,000 people from about 1,600 homes, including the entire town of Jamestown.

The fire was declared 100% contained about a month later on Nov. 14.

After examining physical evidence and conducting interviews, Boulder County Sheriff’s Office (BCSO) completed their investigation on Feb. 10 and said a cause for the fire could not been determined.

Investigators were able to determine the fire started within a 500-foot radius of a specific area, however they could not establish a cause, BCSO said.

The Ice Fire in San Juan County burned 596 acres (about .93 square miles) near the Ice Lakes Trailhead, outside of Silverton.

At one point, 23 hikers were located and evacuated via helicopter.

The Lefthand Canyon Fire started just a day after the Calwood Fire on Oct. 18 and burned another 460 acres (about .71 square miles) near the 14,000 block of Lefthand Canyon Drive  in Boulder County.

The fire, which was declared 100% contained five days later on Oct. 23, forced about 145 residents to evacuate, Boulder Office of Emergency Management said.

The fire was not connected to the Calwood Fire, and the cause is still under investigation.

In addition to Colorado’s historic wildfires, the Mullen Fire in neighboring Wyoming was the largest in that state’s history, burning 176,878 acres (about 276 square miles).

It started burning in the Medicine Bow Mountains 38 miles west of Laramie, Wyoming, and crossed the northern Colorado border into parts of Jackson and Larimer counties, which prompted numerous evacuations

RELATED: Largest firefighting plane may be sold for COVID-19 response